2014 Bowman Chrome Football packs the shine and autographs the brand is known for. Hobby boxes have at least one autograph.

2014 Bowman Football is highlighted by some of the first rookie cards of the season. Hobby boxes have five total hits including four autographs.

2014 Bowman Sterling Football is definitely not short on autograph and memorabilia cards. Each box has a total of 13 of them including at least six autographs.

2014 Flair Showcase Football sees the revival of the brand’s tiered structure made popular in the late 1990s. Hobby boxes include at least two hits and one additional premium insert.

2014 Leaf Best of Football returns with one graded or slabbed high-end buyback card as well as a Rookie of the Year Predictor insert that could be good for a piece of signed memorabilia.

Targeting the retail market, 2014 Leaf Draft Football includes a pair of autographs per blaster box. Johnny Manziel, Blake Bortles and Teddy Bridgewater are among those in the set.

2014 Leaf Johnny Manziel Draft Predictor is an eBay-exclusive set that depicts the quarterback with every NFL team. Those who get the team that drafts Manziel can exchange it for a Manziel autograph card.

Inspired by a couple of designs from the past, 2014 Leaf Originals Football is an all-autograph release. Every box comes with five signed cards. All are signed on-card. 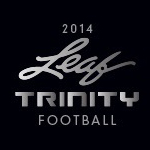 2014 Leaf Trinity Football is the brand’s sophomore gridiron release. Every box has five cards, all of which are either patch, inscribed or glass-style autographs.

2014 OYO NFL Generation 2 minifigures feature a deep roster of players from every team. Take a full look at the LEGO-compatible toys including a detailed checklist.

2014 Panini Certified Football sticks with what the brand is known for: shiny cards, lots of colorful parallels and a decent amount of autographs and memorabilia cards. Every hobby box has a Freshman Fabric Rookie Patch card done on Prizm card stock.

2014 Panini Contenders Football returns with a new batch of Rookie Ticket Autographs and other inserts. Hobby boxes have five total autographs including at least two that are signed on-card.

2014 Panini Crown Royale Football brings plenty of elegant designs and the promise of one autograph or memorabilia card per pack. Silhouettes return as a key chase element.

2014 Panini Flawless Football marks the gridiron debut of the ultra high-end brand. All cards in the product are numbered to 25 or less. Boxes have seven autographs and two jumbo memorabilia cards.

2014 Panini Hot Rookies Football comes with a unique configuration. Boxes have four packs, each with its own distinct mix of cards. Overall, boxes promise three autographs and an autographed memorabilia card.

When it comes to current football card brands, National Treasures is often held in the highest regard as far as high-end sets go. 2014 Panini National Treasures Football returns with three autographs and three memorabilia cards per box.

2014 Panini NFL Stickers feature a large checklist of 484 stickers. These include a traditional mix of basic glossy stickers and holographic glitter.

2014 Panini Playbook Football continues its brand focus on book cards, one of which is in every box. The premium product also has one autographed or memorabilia card per box.

2014 Panini Prizm Football is upping the parallel ante in a big way, going from three Prizm parallels last year all the way up to 11. Hobby boxes also deliver at least one autograph.

2014 Panini Select Football is an amped up spin on the company’s Prizm line. Besides four hits per box, there’s lots of color and a series of interactive predictor-style inserts.

2014 Panini Spectra Football is heavy on three things: autographs, memorabilia and chromium. Sixteen-card boxes have a total of ten hits and a pair of parallels.

2014 Panini Super Bowl XLVIII Collection Football is a small factory set that highlights both the Denver Broncos and Seattle Seahawks. A second configuration adds members of the Giants and Jets, local teams for the host New Jersey area.

2014 Panini Totally Certified Football returns with a new look, albeit one that still puts an emphasis on etched foil. Each pack has either an autograph or memorabilia card.

2014 Press Pass Gameday Gallery Football is an all-autograph release that centers on the 2014 draft. Boxes have five on-card autographs. Johnny Manziel, Blake Bortles and Teddy Bridgewater are among the signers.

2014 Press Pass Showbound Football is an all-autograph release that focuses on the 2014 rookie crop. Boxes come with six cards, all signed on-card.

2014 Sage Hit High Series Football cards round out the set with nine autographs per box. The checklist focuses on players slated for the 2014 NFL Draft.

Targeting collectors looking to get an early start on the 2014 rookie class, 2014 Sage Hit Low Series Football has eight autographs per box. The set also has a PhotObama contest where collectors can win an Autographed Sheet for finding cards with hidden Presidents.

2014 Sage2 Football is all about the multi-autograph card. Every card in the product is either a dual- or triple-autograph numbered to 50 or less.

Aimed largely at the retail market, 2014 Score Football focuses heavily on rookies, inserts and parallels. Each box promises an autograph or memorabilia card.

2014 SP Authentic Football is back for another season showcasing some of the best former and current football stars from a college vantage point. Hobby boxes feature three total autographs, including one Rookie Auto Patch card per box.

2014 Super Break Football features a broad mix of repurchased autographs, rookies and other cards from top brands. Boxes have 1-3 cards plus an original box topper card.

2014 Topps Chrome Football is, traditionally, one of the more widely collected sets of the season. The product returns with the promise of one rookie autograph per hobby box and lots of Refractor styles.

2014 Topps Chrome Mini Football is similar to basic Chrome, only smaller. Each hobby box comes with a rookie autograph and a handful of inserts and Refractors.

Saying 2014 Topps Fire Football has bold design might be an understatement. Hobby boxes come with a pair of autographs and two relic cards.

Focusing largely on rookies and fantasy sports, 2014 Topps Football has a big checklist of base cards, inserts, autographs and memorabilia cards. Hobby boxes promise one hit while jumbo boxes have two autographs and a rookie patch card.

The 2014 Topps Football Complete Set conveniently packages all 440 cards from the flagship set in one place. Hobby sets also come with a pack of five exclusive Orange parallels.

This rookie-heavy product brings the distinct Inception look to the NFL Draft class of 2014. Each box includes two autographs and one jumbo relic card.

2014 Topps Mega Football value boxes are a retail-exclusive that come with packs of Topps Valor and Topps Football plus three Special Edition Topps Chrome cards not available anywhere else.

2014 Topps Museum Collection Football brings back the familiar high-end formula of a hit in every pack. Boxes promise an autographed memorabilia card and a second autograph.

2014 Topps NFL Magnetz is something for collectors looking to branch out from strictly cards. The checklist for the retail-targeted product has more than 100 players including top stars and key rookies.

Sharp photography and ample reasonably priced hits are the focus of 2014 Topps Prime Football. Hobby boxes come with four premium cards including an autographed relic and another autograph.

2014 Topps Supreme Football is back with the promise of a low-numbered autograph or memorabilia card per four-card box.

2014 Topps Translucent Football is an online-exclusive brand debut. Packs of the acetate-stock cards come with a pair of rookie autographs.

With the tagline “High-End Football Redefined,” 2014 Topps Triple Threads Football is back with a few tweaks. Each box promises two autographs, two relics, and the shot at Hand-Stamped Autographs and Transparencies for top 2014 rookies.

2014 Topps Turkey Red Football returns, but as an exclusive to Target. The all-rookie product has 11 cards per box including one autograph.

It’s back. After skipping a season, 2014 Topps Valor Football returns a configuration that includes an autographed patch card, another autograph per box, a patch and a jumbo relic per box.

2014 Upper Deck CFL Football is the first set under the card maker’s exclusive deal with the league. Highlights include a pair of jersey cards per box and randomly inserted autographs from Doug Flutie and Warren Moon.

2014 Upper Deck Conference Greats Football focuses on the schools of the SEC. Hobby boxes deliver an autograph and a pair of player-worn or manufactured memorabilia cards.

2014 Upper Deck Exquisite Collection Football is back one more time as a fully licensed NCAA product delivering five high-end autographs per box. Also included are cards of players slated for the 2015 draft.

2014 Upper Deck USA Football is a hits-laden product filled with players from before their college years. Boxes come with 11 autographs, a pair of game-used jersey cards and one patch card.