Teddy Kremer's story is an inspirational one. Born with Down syndrome, to say he's a big Cincinnati Reds fan would be an understatement. He got a chance to get close to the team when his parents won a charity auction for a chance to be bat boy. Teddy's enthusiasm lifted the team's spirits so much, he was asked to come back and was even given a job with the team. Now he's been honored with a baseball card in 2013 Topps Update Series. 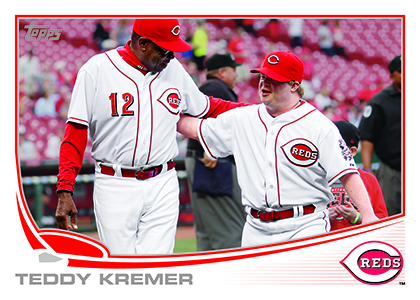 Here's a report that aired on ABC News in September:

The 2013 Topps Update Teddy Kremer baseball card is extremely tough to pull. It's a rare variation short print, taking up the same number as Reds superstar Joey Votto. While many other variations have had many copies show up on eBay, just a couple of the Kremer cards have surfaced.

This is the latest in a series of feel-good stories to make their way to sports cards. Earlier in the year, Upper Deck worked with Jack Hoffman to create a special card to raise funds for pediatric brain cancer research. Upper Deck also included Purple Heart recipient, Doc Jacobs in 2013 Upper Deck Goodwin Champions. 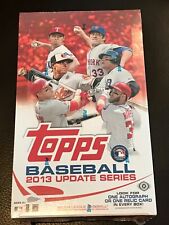 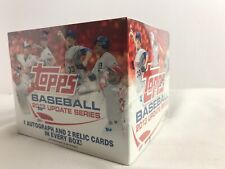