When it comes to Sci-Fi, Planet of the Apes is one of the greatest franchises of all time. While it's easy to laugh at some of Charlton Heston's lines, it's still a groundbreaking film in many regards. 1999 Inkworks Planet of the Apes Archives is the most in-depth set to tackle the original films, delivering a rounded base set, the series' first autograph cards and more.

The base set has 90 cards. The first two films get 18 cards each while the final three are summed up with nine cards a piece. The checklist is rounded out with deleted scenes, key characters and behind-the-scenes activities.

Leading the chase are Autographs. While there's no Charlton Heston or Roddy McDowall, it does include Linda Harrison. As some of the only autograph cards in the franchise's history, they're still held in fairly high regard. They came out at a time that autographs weren't guaranteed hits and Inkworks never officially released insertion rates.

McDowall is the focus of his own insert set, Roddy Revealed. The four-card foil set highlights characters and films he appeared in. They land 1:27 packs.

The final insert is a die-cut Future of Liberty Copperworks card. Although it's inserted 1:108 packs, it's not overly rare as it's the only card in the set.

The checklist is rounded out by three different promo cards.

1999 Inkworks Planet of the Apes Archives boxes come with 36 packs of eight cards. 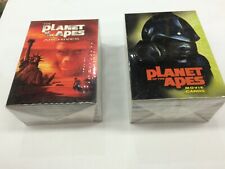 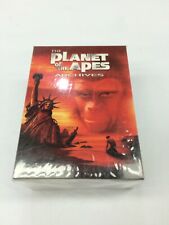 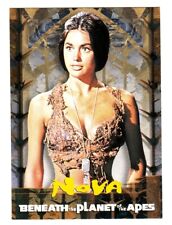 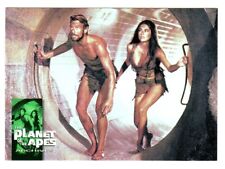 PLANET OF THE APES ARCHIVES BASE CARD 24 SHOCKING DISCOVERY
$6.99 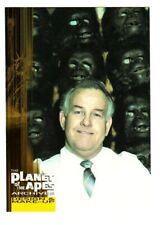 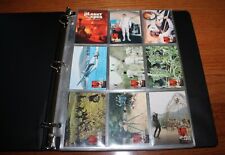 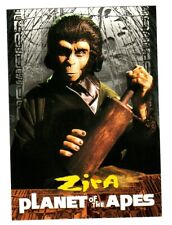 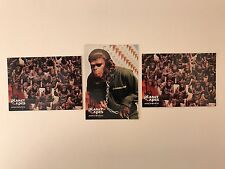 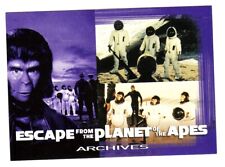 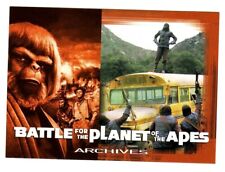 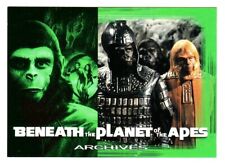 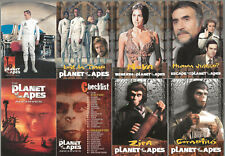 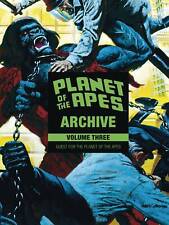 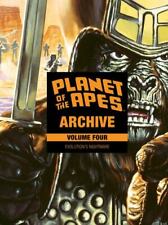 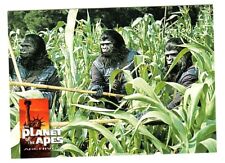 PLANET OF THE APES ARCHIVES BASE CARD 6 THE WILD HUNT
$6.99 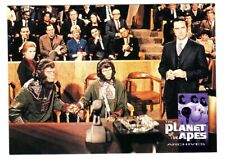 PLANET OF THE APES ARCHIVES BASE CARD 40 THE INQUISITION
$6.99 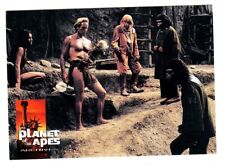 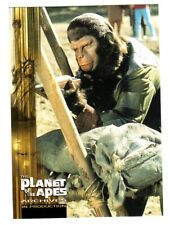 PLANET OF THE APES ARCHIVES BASE CARD 89 CAESAR'S CONFLICT
$6.99

90 cards. Shop for base sets on eBay.
1 Planet of the Apes
2 Star Voyagers
3 An Accident in Time
4 Splashdown
5 Scarecrows
6 The Wild Hunt
7 Human Harvest
8 Day of the Hunter
9 Caged
10 Dodge's Fate
11 Freak or Missing Link?
12 Monkey Trial
13 The Escape
14 A "Less-Intelligent Look"
15 Key to the Past
16 "You're So Damned Ugly"
17 Zaius' Secret
18 The Terrible Truth
19 Beneath the Planet of the Apes
20 An Ill-Fated Rescue
21 The Gorilla War Machine
22 Brent's Fight for Life
23 A Plea for Peace
24 Shocking Discovery
25 The Mutant Humans
26 Powers of the Mind
27 Ursus on the March
28 The Burning Idol
29 Their True Selves Revealed
30 Taylor...Alive!
31 Invading the Mutant Stronghold
32 The Death of Nova
33 The Bomb Under Siege
34 Brent's Final Stand
35 "It's Doomsday!"
36 Death of a Planet
37 Escape from the Planet of the Apes
38 The Astro Chimps
39 Friend or Foe?
40 The Inquisition
41 Chimp About Town
42 Zira's Blessed Event
43 No Way Out
44 End of a Love Story
45 The Hope of Tomorrow
446 Conquest of the Planet of the Apes
47 Cruel New World
48 A Rage in Chains
49 Simian Slavery
50 Torture and Revolt
51 City of Riots
52 Confrontation
53 The Capture of Breck
54 King Caesar Speaks
55 Battle for the Planet of the Apes
56 Caesar's Dream
57 The Mutants Strike Back
58 Son of the Ape King
59 Prisoners
60 "Can't We All Get Along?"
61 Taylor's Flight
62 Unseen Incarnations
63 The Unkindest Cuts
64 Zira
65 Cornelius
66 Lost in Time/The Right Stuff
67 Orangutan Elders
68 Nova
69 The Human Mutants
70 Gorilla Warmongers
71 Human Justice?
72 Caesar's World
73 Ape Conceptions
74 Trek Across the Desert
75 Scarecrow Encounter
76 City of the Apes
77 Mutant Conceptions
78 Depicting a Revolution
79 Make-Up Wizard John Chambers
80 Bringing Zira to Life
81 Simian Transformation
82 Shooting Taylor's Trial
83 The Agony of Captivity
84 Two for the Road
85 Knowing the Score
86 A Sequel Roars to Life
87 Fun on the Set
88 Supervising Movie Mayhem
89 Caesar's Conflict
90 Checklist 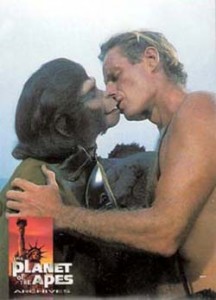 5 cards. Insertion rates not announced.
A1 Linda Harrison as Nova
A2 Natalie Trundy as Lisa
A3 Jeff Corey as Caspay
A4 Don Pedro Colley as Ongaro
A5 Buck Kartalian as Julius 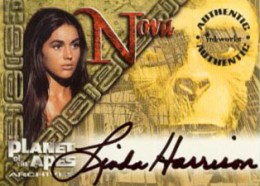 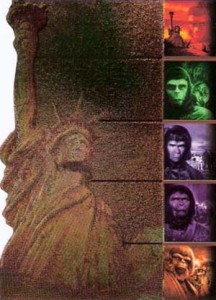 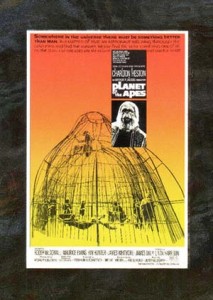 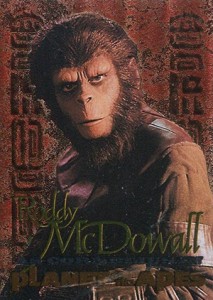 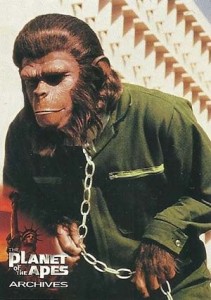