Walter "Rabbit" Maranville was a diminutive shortstop whose career started during the Deadball Era with the Boston Braves. The Hall of Famer was known for being one of the greatest defensive players of his generation, as well as one of the most outlandish personalities off the field, earning himself a place in Cooperstown in 1954. This list of Rabbit Maranville cards looks at some of the best options for collectors who are interested in his pre-war cards, as well as a few "newer" cards that are a little easier on the wallet.

Rabbit Maranville first appeared for the Braves during the 1912 season. His 23-year career also saw stops with the Pirates, Robins (Dodgers), Cubs, and Cardinals. While there were no official Gold Glove Award winners during this time, Maranville was so impressive on defense that he regularly received MVP consideration for his fielding alone, and is still Major League Baseball's all-time assists leader.  His glovework helped the Braves win the World Series in 1914 and the Cardinals claim the National League pennant in 1928.

Maranville started appearing on various gum, candy, and game cards early in his career during the 1910s. His later cards came in many of the classic baseball card issues from the 1930s, such as Goudey and Diamond Stars. No matter the year, many of Maranville's pre-war cards can be difficult to find, are often condition-sensitive, and hold a high price tag.

There have also been numerous Rabbit Maranville cards issued since his retirement, which can be much easier to find at an affordable price, and several are noteworthy. Maranville has long flown under the radar of collectors, but as a Hall of Fame player who appears in some legendary baseball card sets, he is a worthy addition.

Are there any other great Rabbit Maranville cards in your collection? Let us know in the comments.

Click on the card titles or images to shop for specific cards on eBay. Bolded sets go directly to detailed product profiles and checklists when available.

Rabbit Maranville cards produced after the end of his career feature some great options. One of these cards is from 1963 Bazooka All-Time Greats, which is a 41-card set inserted into packs of Bazooka gum. The foil backgrounds on these Hall of Fame cards come in both gold and the rarer silver. Due to peeling foil, Bazooka All-Time Greats cards can be fragile, but they are still very affordable and relatively easy to find. 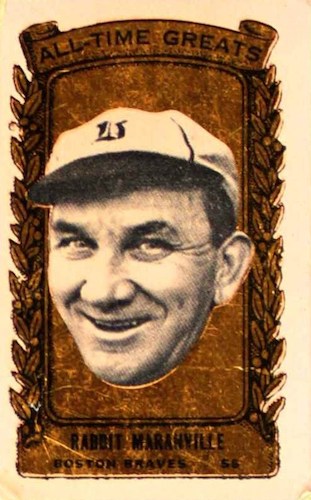 1960 Fleer circumvented Topps' exclusive rights to produce baseball cards of current players by creating a 79-card set featuring players enshrined in Cooperstown. Maranville appeared in both 1960 Fleer and 1961 Fleer. As a member of the National Baseball Hall of Fame, he is found with many of his HOF peers, including Ty Cobb and Babe Ruth. Both Fleer cards of Maranville are attractive options for collectors based on their availability and affordable price tag. A slot nod goes to the 1960 Fleer card with its full-color picture of the shortstop. 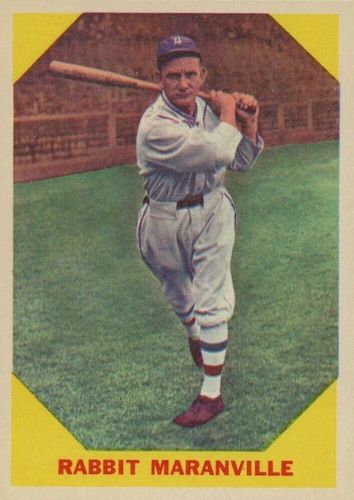 The 1919 W514 strip cards were available at grocery and candy stores. Cards can still be occasionally found as complete strips, but those are rare. As a hand-cut card, these are obviously condition-sensitive and collectors can expect to pay more for cleaner copies. The Rabbit Maranville card also offers another wrinkle. While this set was originally attributed as a 1919 release, it is now viewed as a multi-year issue with card variations occurring in 1920 and 1921. The original Rabbit Maranville W514 is a 1919 card with him identified as a member of the Boston Braves. There is also a variation that was issued in 1921 with him as a member of the Pirates. The lone difference between the two cards is the team name at the bottom, as the same picture was used for both. 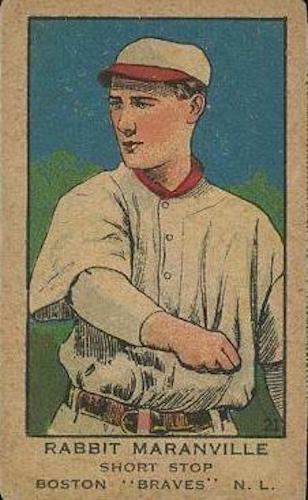 The W590 cards are another strip card set that is also condition-sensitive because they are hand-cut cards. This set has distinct black-and-white photography with the player name, player position, and team name all underneath the photograph. Similar to the W514 strip cards, the W590s were issued over multiple seasons, and offer player collectors the chance to find different variations with different teams. Rabbit Maranville has cards with both the Braves and the Cubs. The picture is the same on both cards, although the later cards often have a grainer photograph. The design difference between the Cubs and Braves cards is the team name on the bottom. The Cubs card came first with an issue date of 1925-1926, while the Braves card was likely issued in 1931. Also like the W514 cards, these are fairly rare. 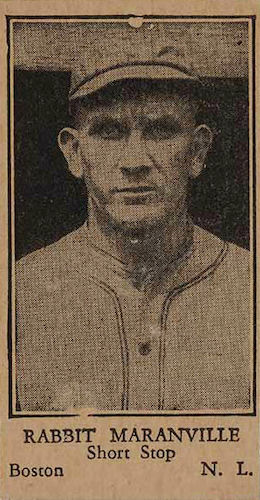 Diamond Stars cards were produced by the National Chicle Gum Company between 1934 and 1936. There are some collectors who view the line as a three-year release, while others treat the cards from each year as its own individual set.  Maranville’s beautiful Art Deco card appeared in the first run of Diamond Stars cards in 1934. The card features a bright background with a ballpark scene, which was common throughout the set. Since Maranville appeared in the first batch of cards, the back of his card can only be found in green ink. Because the initial run was produced in 1934 and then again in 1935, Maranville is slightly easier to find than some of the other cards in Diamond Stars. 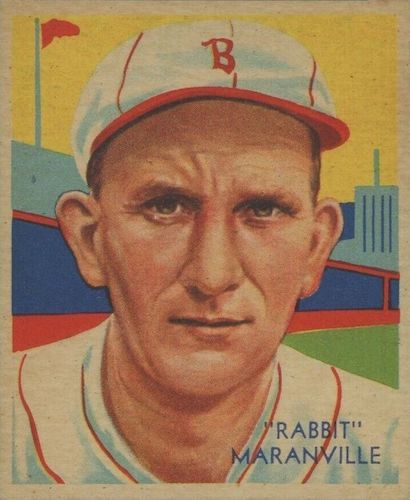 Although 1933 DeLong gum cards are rare and can be tough to locate in good condition, these cards remain very popular with vintage collectors. The brightly-colored background with a miniature stadium contrasts nicely with the black-and-white player image. This is a Maranville card with a steep price tag, but it is also part of a classic set that has a high level of appeal. 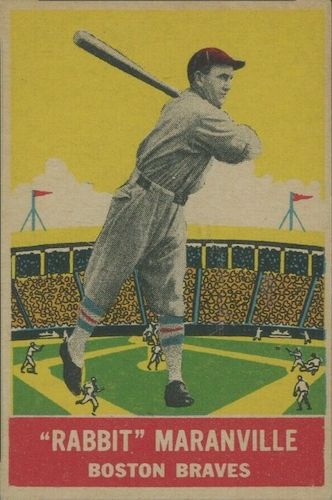 1935 Goudey may lack the overall demand of the Goudey sets released in 1933 and 1934, but they are still worth checking out. These cards feature four players on the front, typically teammates, with different backs that could be combined with other cards to complete a puzzle. There are numerous Hall of Famers in the set, and it is generally the most affordable of the 1930s Goudey products. The challenge with the 1935 Maranville card is the fact that it is attached to Babe Ruth's most notable Boston Braves card.

Like many of the other players in the 1935 Goudey set, the picture for Maranville is the same as 1933 Goudey. Collectors looking to add this to their collection have to weigh the popularity of the 1935 card, which carries a premium due to Ruth’s presence, against his 1933 card solo card that can have a higher price based on the popularity of the product. 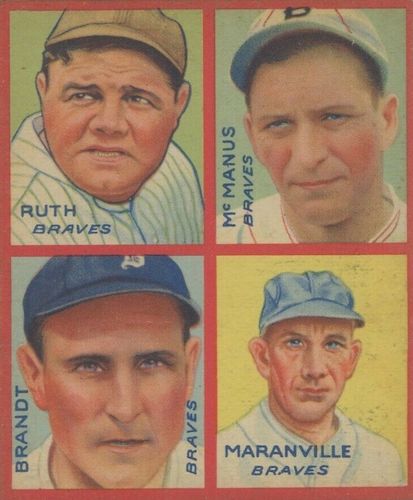 This multi-sport U.S. Caramel set was one of the later card options for the brand. The majority of the set is made up of Hall of Fame baseball players, but there are also a few golfers and boxers included in the checklist. At the time of its release, collectors could redeem a completed set for a baseball, while three full sets yielded a fielders glove. This Maranville card features a red background with a color photo of the shortstop in his Braves uniform. Even though this card is from further along in his career, this is one of Maranville’s most popular cards. The card can be tough to track down and is definitely a high-ticket item. 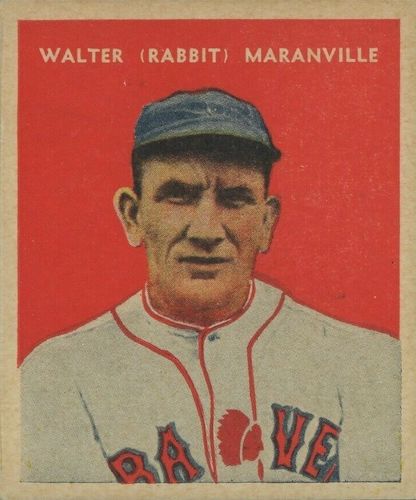 1914 Cracker Jack cards are hard to find and come with a steep price. It remains one of the most easily recognizable card brands and is highly sought-after by collectors. Tobacco card sets from this time tend to have a more complete checklist, but if you are searching for Hall of Fame-caliber players, the 1914 Cracker Jack set is a great place to look. Similar in design to U.S. Caramel, the Rabbit Maranville Cracker Jack card features the trademark red background with a colorized picture of the Braves shortstop. The card was packaged with peanuts and caramelized popcorn, so it is a challenge to find this card in good condition. Maranville's 1915 Cracker Jack card looks virtually the same, but the card stock is thicker and the backs are printed upside down. 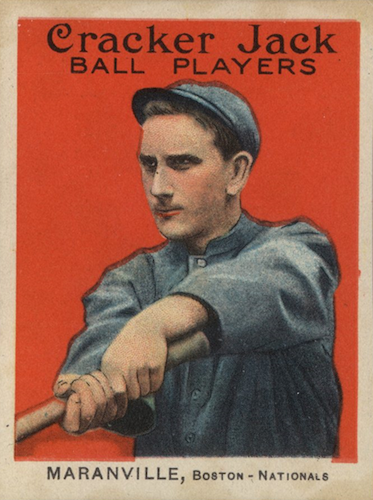 1933 Goudey is one of the most-pursued vintage sets of all-time. This card is considered the official Rabbit Maranville rookie card. That is also the case for dozens of other Hall of Fame players appearing in this set. The colorful background colors of the cards make them easy to identify, but also have made them condition-sensitive due to fading. Maranville’s card features a yellow background with a color photo. However, the muted background color of the Maranville rookie has held up well over time. Raw copies and graded copies of this card are far less expensive than his 1935 Goudey card with Babe Ruth. Overall, this card represents one of the most affordable options for those looking to acquire Hall of Fame rookie cards from this set.

He also has a very similar card in 1934 World Wide Gum from Canada. 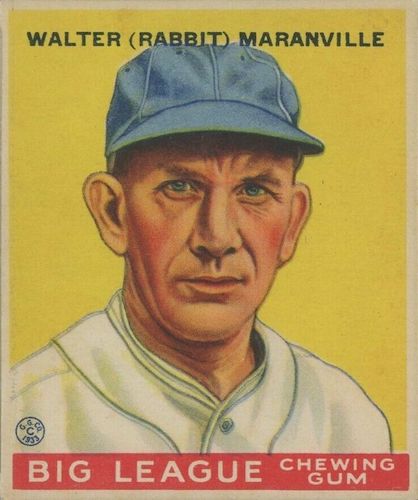 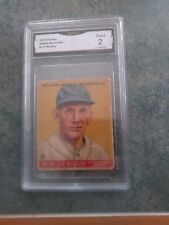 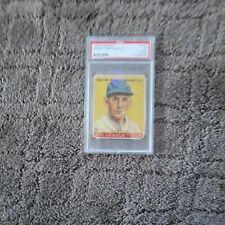 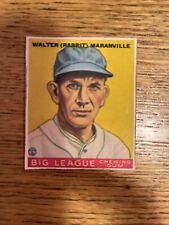 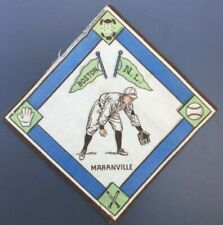 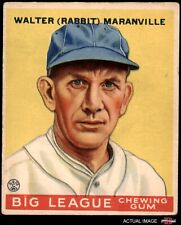 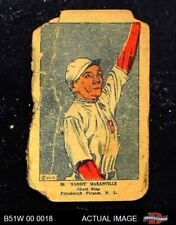 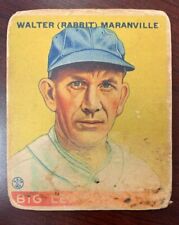 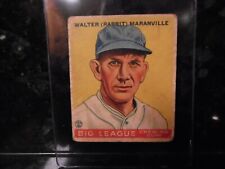 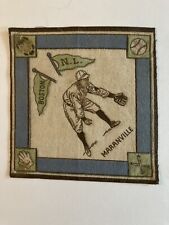