Keith Hernandez was one of the greatest defensive first basemen in the history of the game and a key component on championship teams with both the New York Mets and the St. Louis Cardinals. In addition, his broadcasting career and appearance on Seinfeld have made him a newsworthy figure years after he left the game as a player. This list looks at some of the most notable Keith Hernandez cards to track down.

Hernandez broke into the Majors during the mid-1970s with the Cardinals. Mentored by Hall of Famer Lou Brock, he became a star player, nabbing both the batting title and a share of the 1979 National League MVP (with Pirates great Willie Stargell). Hernandez would pair with Ozzie Smith to lead the Cardinals to the 1982 World Series title. He joined the Mets in 1983, winning the 1986 World Series alongside Darryl Strawberry, Dwight Gooden and Gary Carter. Hernandez's accomplishments have helped him garner Hall of Fame consideration since retiring but he never broke 10.8% of the vote during his years on the HOF ballot.

The former first baseman made his first appearance on a baseball card in the 1975 Topps set. The guide below highlights several of the best Keith Hernandez cards, including his rookie card, a few key popular cards from his time as a player with the Mets and Cardinals, and his top modern autograph cards.

Babe Ruth on the Braves and Hank Aaron on the Brewers are two examples of the many players who popped up in unexpected places at the end of their careers. Did you know that Keith Hernandez played for the Indians? There are dozens of 1990 cards that feature Hernandez as a Met, but a few managed to capture him in an Indians uniform before he retired from the game. It's hard to believe that his career did not end playing with the Mets. This 1990 Topps Traded card has quietly become a favorite from the "junk-wax era." Collectors can find the card in factory sets, either with the standard stock or the Tiffany version. Although not quite the Willie Mays Mets card in 1973 Topps Baseball, it's still worth a place in your collection. 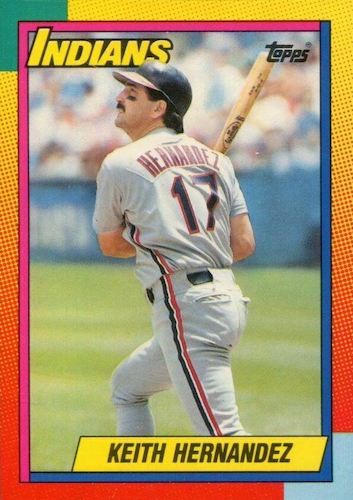 Major League Baseball started placing sheets of cards inside the programs that were sold at the All-Star Game during the summer of 1981. It was a short-lived experiment that only lasted until 1985. Many collectors hand-cut the cards out of the programs, which means that there is a wide range of conditions. Clean-cut copies can be pricy, and those with imperfections can be less expensive. You can also try to locate old All-Star Game programs if you are interested in collecting these cards. Many can still be found with the sheets of cards untouched. Keith Hernandez appeared in the set All-Star Game program insert multiple times, including the 1984 and 1985 sets as a Met. 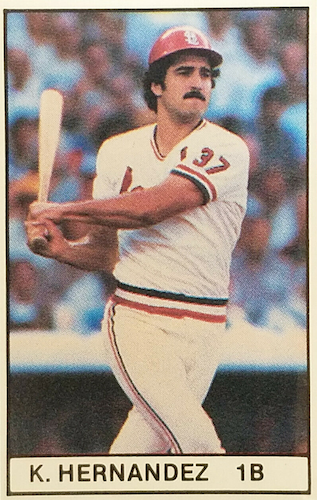 Keith Hernandez was one of the most popular members of the 1986 Mets World Championship team. There have been several cards made over the years to commemorate the team and the Stadium Club World Championship relics are some of the most popular. The cards in the set are not serial numbered, but they are in short enough supply that they are not easy to come across on the secondary market. Since they can be difficult to find, they are often more expensive than many of the memorabilia sets from the 2000s. Joining Hernandez, Mets collectors can also find cards for Mookie Wilson and Gary Carter. 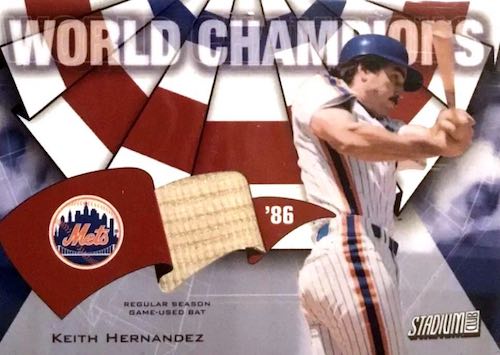 Hostess cards remain some of the best food-based baseball issues of all-time. Many of the cards available to collectors on the secondary market were cut off of box panels back in the 1970s. The fact that they were often hand-cut has made them condition-sensitive, and, as such, they are prone to having uneven edges and being off-center. This Keith Hernandez card is generally sold as a single, but collectors can also find his three-card panel. He is accompanied by Steve Carlton and Graig Nettles on his box panels, making for a pretty good trio. Hernandez also made appearances in the 1978 and 1979 Hostess sets, but the 1977 card is the top draw. 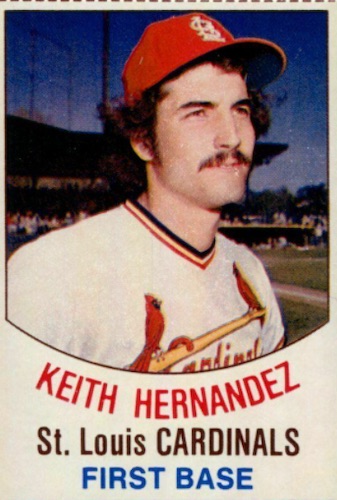 This second-year Keith Hernandez card is another noteworthy option from early in his career, and also his first solo Topps card. The card is helped by the fact that 1976 Topps does not feature any standout rookies outside of Dennis Eckersley. This has boosted interest for sophomore cards, including Hall of Famers George Brett and Robin Yount. Beyond the aforementioned virtues, Hernandez's 1976 card offers collectors an affordable card that is not too difficult to find. Even the high-grade copies are reasonable in comparison to some of the other cards from this era. 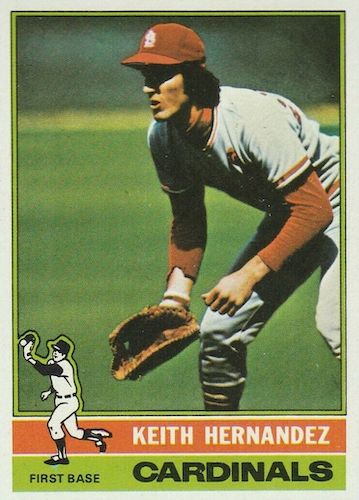 The 1980 Kellogg's set is another food-based release containing a popular Keith Hernandez card. The fronts of cards were produced using lenticular printing to give them the appearance of having depth and being 3D. The front of the cards can crack, so you should give attention to the condition of these Kellogg's cards when adding them to your collection.

This design looks remarkably similar to 1972 Kellogg's with some small differences around the player nameplate and position. These sets typically had small checklists focused on the current stars of the game. After winning the 1979 National League MVP, the inclusion of Hernandez's first Kellogg's card in the 1980 set was a given. 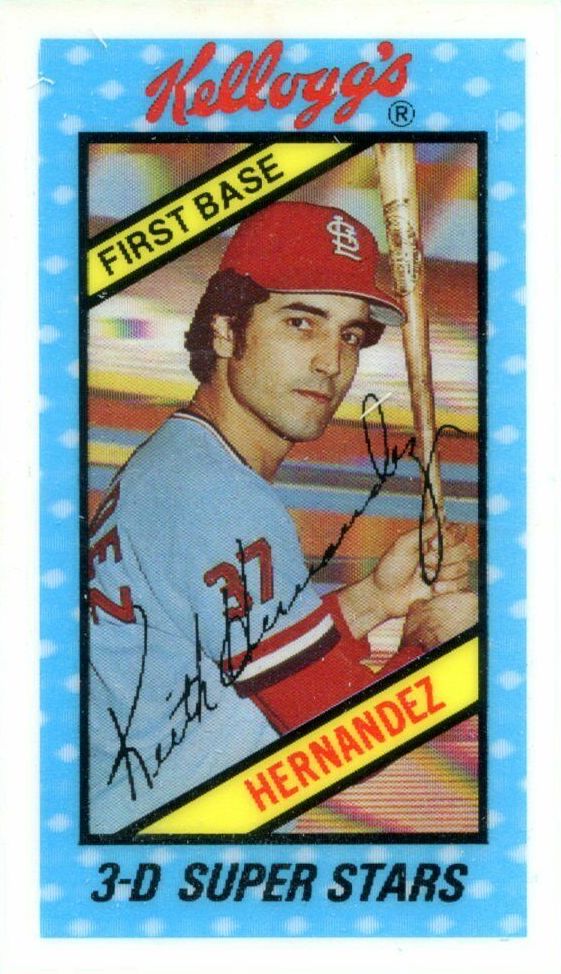 Hernandez was traded to the Mets from the Cardinals in the middle of the 1983 season. Topps was the only card company that featured Keith Hernandez as a Met that year. The 1983 Topps Traded card is a must-own for Mets collectors, and the set also features one of the best Darryl Strawberry rookie cards. This Hernandez card was sold in the boxed set, but there are plenty of single copies available at a reasonable price. Unfortunately, there is no Tiffany edition for 1983. Topps did not start producing these premium versions until the following year with 1984 Topps Traded. 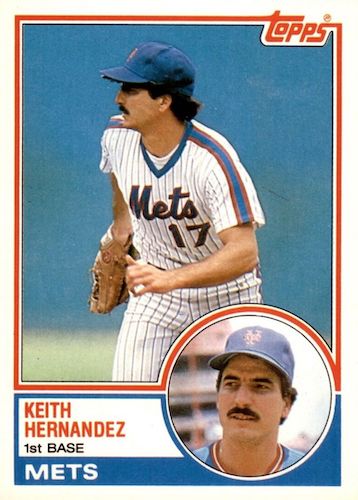 Keith Hernandez has appeared in several different Upper Deck products as an autograph signer over the years. In 2005, the card giant included him on the high-end Ultimate Collection checklist. One wrinkle which makes this set popular with Hernandez collectors is the fact that UD had him sign cards as both a Cardinal and Met. If you are a Cardinals or Mets fan, the choice is obvious, but if you are just adding a Hernandez autograph to your collection, there are positives for either card. The New York autograph is the tougher find and celebrates his time with the very successful 1980s Mets. Meanwhile, the Keith Hernandez signature for St. Louis is easier to locate, but he does not have nearly as many autographs of him wearing the birds on the bat, where he won an MVP and a World Series. Really, you cannot go wrong. 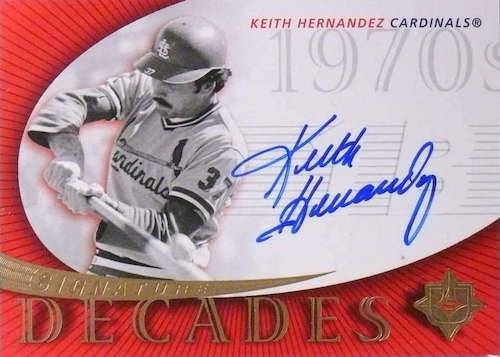 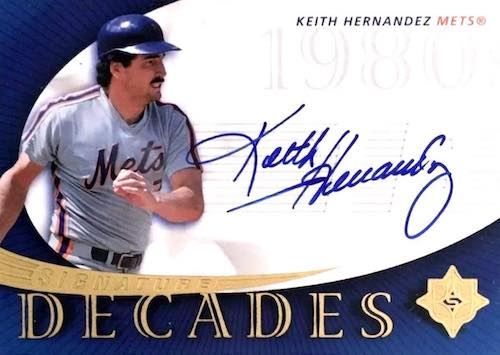 2004 UD Legends Timeless Teams focuses on 30 years worth of World Series-winning squads. There are plenty of members from the 1986 Mets represented on the checklist, including Gary Carter, Dwight Gooden, Darryl Strawberry and Keith Hernandez. There are various combinations featured on the dual signature cards, with all of them being serial numbered out of 150 copies. The Ray Knight dual signature pairs him with the 1986 World Series MVP, who was a tough find on certified autographed cards until more recent years. Hernandez is also featured with Gary Carter. There are triple signatures in this product, as well, but Hernandez was not included on any of those Mets cards. 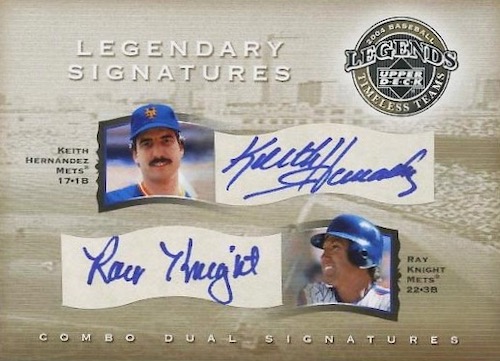 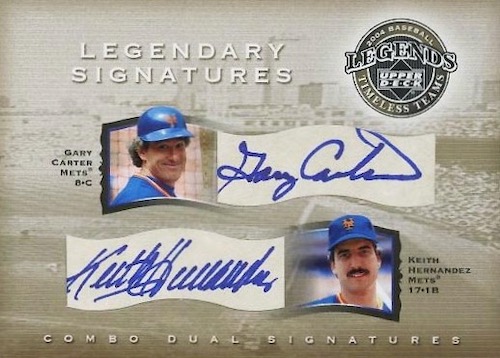 1975 Topps is one of the boldest and most colorful designs ever used for the company's base set. The product is also loaded with rookie cards. There are plenty of Hall of Famers to collect, with Robin Yount, George Brett and Gary Carter earning the majority of the attention. However, the Keith Hernandez rookie card is worthy of your attention, too. Outside of the great design, this card is generally plentiful and relatively inexpensive. If you want a higher-end copy, there are plenty of graded copies out there. Collectors can also add the undersized copy of this card from 1975 Topps Mini. No matter your preference, this is a quintessential card for your collection. 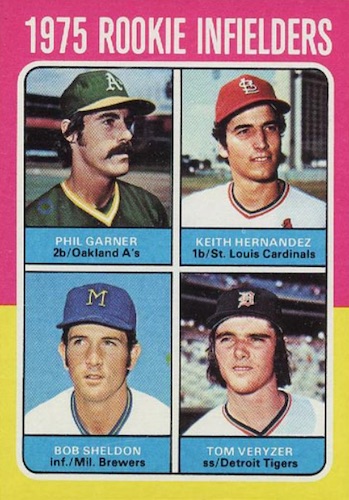 1985 Topps Oversized Baseball Card for Keith Hernandez of the Mets
$24.99