Although he started in the NFL in 2007, Calvin Johnson did not get as much early publicity because he was one of the few bright spots on some terrible Detroit Lions' teams, including the 0-16 squad of 2008. Nevertheless, Megatron was a dominant force in the NFL for many years. In 2012, Johnson set the NFL record for most receiving yards in a season with 1,964 yards. He retired as one of the most accomplished wide receivers in history and was named a first-ballot Hall of Famer in 2021.

The Calvin Johnson rookie cards were issued in 2007 and these rookies remain his key cards for most collectors. While the total options are quite plentiful, his signed cards typically garner the most attention.

View the most popular Calvin Johnson card auctions on eBay.

With nearly 40 cards choices, the following list documents some of the best Calvin Johnson rookie cards available to collectors. Most feature autographs and limited print runs.

Although they are all found with relative ease, prices can push fairly high for the very top choices.

Click on the listings to shop for singles on eBay or check completed sales values.

If you are in the market for Calvin Johnson rookie cards, 2007 Finest NFL offers an affordable base option that can be easily upgraded with rare Refractor parallels and autographs. 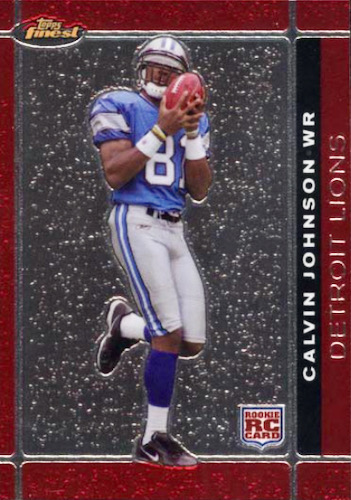 More popular than Finest, 2007 Topps Chrome Football also works with a Refractor-heavy lineup. In particular, the White Refractor (#/869) edition is an eye-catching example that switches out the base black frame. 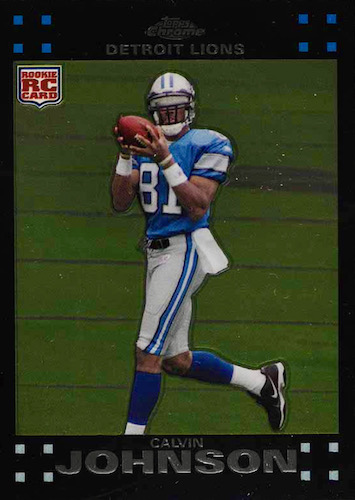 SPx is known for its loud designs and 2007 was no different. An X-shaped layout splits the card into four, with a refractor finish. The SPx die-cut jersey logo does dominate the card and tends to overshadow the sticker autograph below. 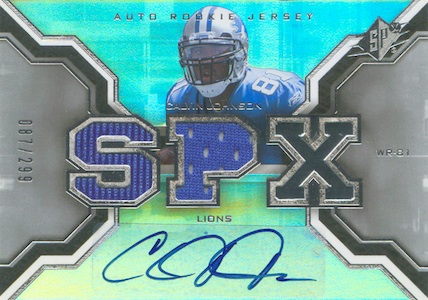 2007 SP Chirography was a short-lived brand from Upper Deck, but it remains relevant due to the 2007 rookie class that included Calvin Johnson and Adrian Peterson. While the card itself is nothing special, and the background just appears to be heavy clouds, a low print run of 149 and sticker autograph helps keep it relevant. 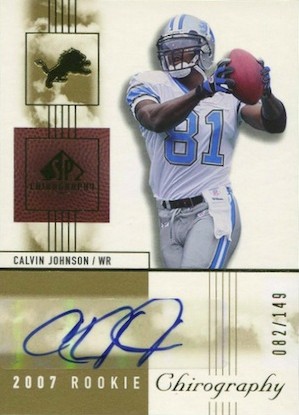 2007 Limited contains another Calvin Johnson rookie card that offers good value. Including a jersey piece, sticker autograph and print run of 99, it matches up with most of the top cards on this list. Despite this, it can generally be found for more reasonable amounts. 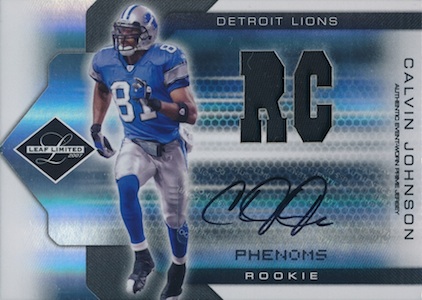 Basically a more subtle version of the Triple Threads card, the inaugural 2007 Upper Deck Premier Football tones down the color and doubles the print run. While the sticker autograph does not stand out in a negative way, the large single-color jersey piece is a bit of a letdown. The Upper Deck Premier Football brand did not last long in the hobby, and only saw one more release in 2008 before it was scrapped. 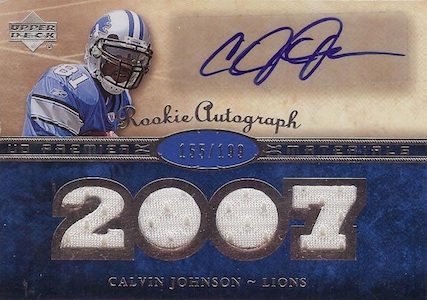 Like a slap in the face, the 2007 Topps Triple Threads rookie card for Calvin Johnson makes its presence known. A foil sticker autograph is centered in a vivid red background with a trio of patch pieces below. It may not win style points, but the print run of 99 keeps it popular with collectors. 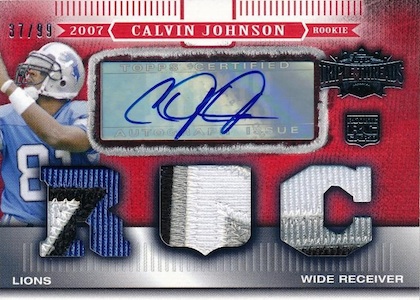 On paper, this card may not seem as worthy as other Clavin Johnson rookie cards to be featured on list. However, Playoff Contenders has established itself as a popular option for rookie collectors based on its short-printed autographs. Even though the announced print run of 525 copies is on the high side and the card includes a sticker autograph, values remain strong for this top rookie card. 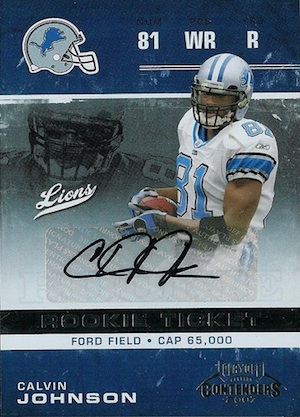 Calvin Johnson's 2007 SP Authentic rookie card may have one of the highest print runs of the group, but it makes up for that with a great design and on-card autograph. It also adds a small jersey piece, offering one of the better overall Calvin Johnson rookie card values and slightly easier to track down. 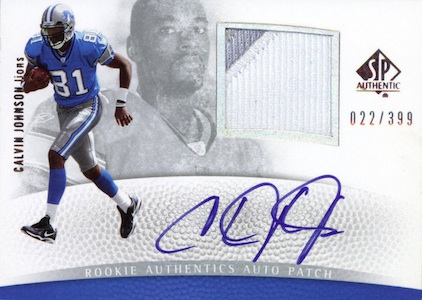 It may not feature a jersey piece like many of the other cards on this list, but the 2007 Ultimate Collection rookie card for Calvin Johnson really works. The vivid blue pops off the card and the silver foil signing area does a great job showcasing the signature. While it is not technically on-card, which may disappoint some collectors, the trapped cut signature is well incorporated into the design. 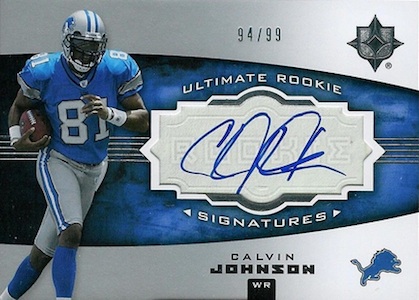 National Treasures has proven to be a worthy competitor to Exquisite Collection. Depending on individual preferences, the layout for Calvin Johnson's National treasures rookie card might be a better card due to the clean design. In any case, the card is a close second to Exquisite rookie as it matches up in every category. 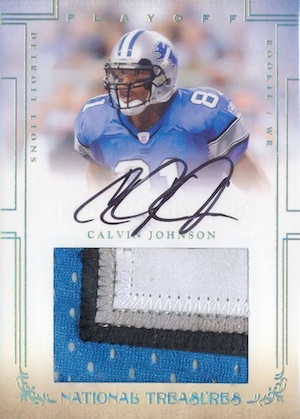 Although it is one of several Calvin Johnson autographed relic rookie cards that are numbered to 99 copies, the 2007 Exquisite card takes the top spot because of the brand recognition and appealing look. With an on-card autograph, medium jersey patch and limited print run, this is the top Calvin Johnson rookie card on many collecting lists. 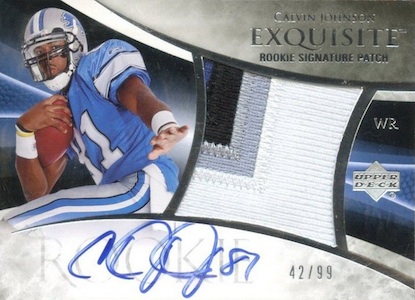