It's no secret that Canada takes great pride in its hockey. So when the Olympics roll around, anything short of a gold medal is a disappointment. Many of the game's greats have worn the maple leaf over the years. 2014 McFarlane Team Canada Hockey Sports Picks immortalize two of the most recent heroes, Sidney Crosby and Jonathan Toews, with highly detailed figures.

Including Crosby in the lineup is obvious. At the 2010 Olympics in Vancouver, Sidney Crosby scored one of the most dramatic goals in hockey history to give Canada the gold on its home turf. It came in overtime against the rival American squad. Immediately, it ranked alongside Paul Henderson's 1972 Summit Series goal and Mario Lemieux's 1987 Canada Cup clincher as far as top Canadian hockey moments.

The 2014 McFarlane Team Canada Sidney Crosby figure has him wearing the new red jersey that will be worn in Sochi. He comes with a stick and is posed on the follow-through of a shot.

Toews was also on the 2010 Canadian Olympic team. In fact, the Blackhawks captain was named the best forward in the tournament. He has helped Canada win several international tournaments including a pair of World Junior Championships.

The main 2014 McFarlane Team Canada Jonathan Toews figure has him in the black third jersey that's planned for Sochi. There is also a white-jersey variant featuring Toews.

The 2014 McFarlane Team Canada Sport Picks are slated to release in February. 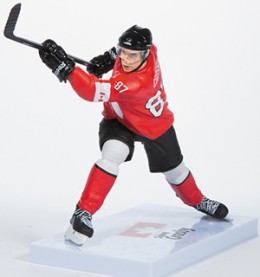 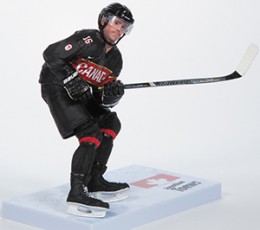 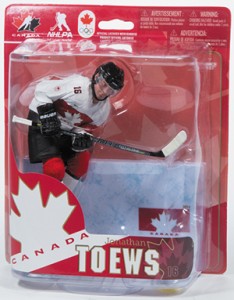