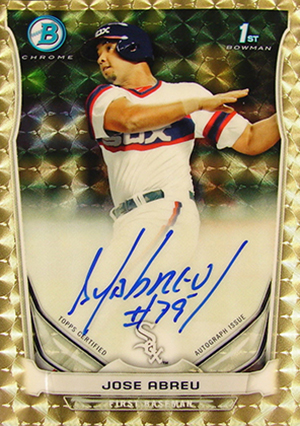 UPDATE (5/5/14): The whereabouts of the 2014 Bowman Jose Abreu Autographed Superfractor is once again known and collectors will have another shot at it. Pastime Card Company has acquired the card for inclusion in their upcoming repackage product, 2014 Pastime Bases Loaded.

Releasing in July, Bases Loaded is limited to 850 boxes. It includes two notable rookies or autographs and either an art card, memorabilia redemption, a points card that can be used for autographed Hall of Fame jerseys or another rookie or autograph.

UPDATE (5/2/14 PM): Both of the listings were ended early. The seller of the Jose Abreu Autographed Superfractor confirms that the card sold. While they didn't want to say the exact amount it went for, they did say it was higher than $15,000 but less than $20,000. We've reached out to the other seller and have yet to hear back.

That didn't take long. After two days in official release, both of the 2014 Bowman Jose Abreu Superfractors have surfaced on eBay.

Given his hot start, to put it mildly, the 2014 Bowman Jose Abreu Superfractor Autograph is likely to be one of the top cards of the year -- if not the top.

It's currently listed with a Buy It Now price of $28,000. The seller is also accepting offers.

The unsigned 2014 Bowman Jose Abreu Superfractor is also on eBay as a Buy It Now. This time the price tag is $7,499.99. The seller is also fielding offers. 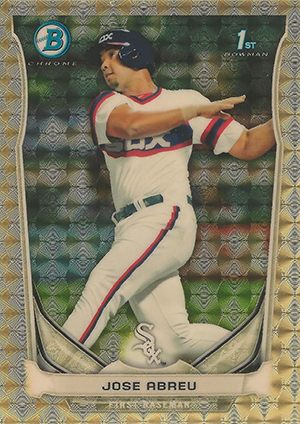 There's still one more 2014 Bowman Superfractor of the Cuban slugger that hasn't surfaced, the Mini insert. That said, it's probably the least desirable of the three.

These aren't the only high-profile Superfractors to show up early on eBay. Both the Mark Appel Autograph and Mini Autograph have also been listed. His main autograph was ended early, which might mean that it was sold privately. It originally had an asking price of $9,999.99.