In a format that's different from most other sets, 2012 SAGE Hit High Series Football is essentially the second half of a larger set released at the same time. With the same product configuration as 2012 SAGE Hit Low Series, High Series acts as a bookend of sorts. Whereas the first half is led by Heisman Trophy winner Robert Griffin III, High Series is highlighted by Justin Blackmon, Trent Richardson, Chris Polk, Kendall Wright and many other top 2012 NFL prospects. Autographs are the primary chase, falling six per hobby box (1:5 packs). SAGE promises all autographs are in packs and that there are no redemption cards. This removes any long-term uncertainty for the set when it comes to opening packs and boxes years later. Both the Write Stuff and Artistry insert sets continue from Low Series. 2012 SAGE Hit High Series adds another 75 base cards (numbers 76 to 150) to the master set checklist. Players are once again featured on "Stat Cards" and "2012 Rookie" cards. 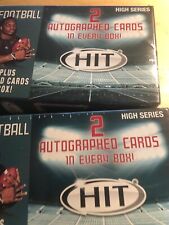