Every wonder what some of the rare Michael Jordan cards are really worth? For one such card, that question is going to be answered. A 1997-98 Metal Universe Precious Metal Gems Red Michael Jordan has made its way to eBay. Ending today, bidding is over $17,000. 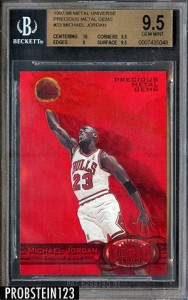 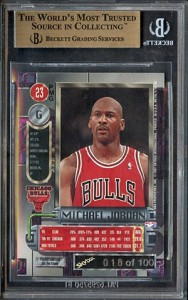 Over the years, Precious Metal Gems have become one of the hobby's landmark inserts. Despite no autographs or memorabilia, they command high prices and lots of attention, even for lesser players. But when someone like Jordan or Kobe Bryant pops up, it's interesting to watch where the price ends up. Add to that the Gem Mint grade and this card should be considered a cornerstone of the modern hobby.