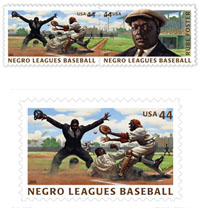 The Negro Leagues Baseball stamp pays tribute to the all–black professional baseball leagues that operated from 1920 to about 1960. Considered the “father" of Negro leagues baseball, Andrew “Rube" Foster (1879–1930) established the Negro National League in 1920, the first successful league of African–American baseball teams.

After the 1960's the Negro Leagues became less relevant, which meant they had succeeded, Major League Baseball was no longer a sport of segregation, it meant that baseball's best players were sharing the same diamond on a sunny Saturday afternoon. The two se–tenant  stamps feature a scene painted by Kadir Nelson of San Diego, California. The two stamps come together and cost $8.80.

Along with the the stamp, USPS are also be offering a host of other Negro League treasures:

2001 Topps What Could Have Been American Giants Baseball Card #WCB5 Rube Foster
$1.99