When it comes to post-war hobby legends, none are bigger than 1950's Mickey Mantle Baseball Cards. The growth of baseball cards coincided with the prime of his career. The result has been a long-time connection that's part nostalgia and part history. In particular Mickey Mantle baseball cards from the 1950s carry a particular appeal with collectors and fans today.

When Mantle was making a name for himself with the New York Yankees, Topps and Bowman were fighting for baseball card supremacy. Both were adding new innovations in attempts to outdo one another. The result was a Golden Age for baseball cards, of which Mickey Mantle remains the symbol.

There's just one Mickey Mantle rookie card. And it's not found in 1952 Topps Baseball. Rather, it came a year earlier with this 1951 Bowman beauty. The painted card is a part of hobby history, even if it doesn't carry the lore or it's 1952 Topps counterpart. Understandably, looking to buy this classic in any condition is going to cost a lot. 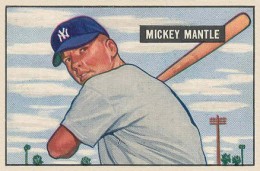 The 1952 Bowman Mickey Mantle features another piece of beautiful artwork. Although it sits in the shadow of the its Topps counterpart as far as recognition and value, it's a relatively affordable (although still pricey) way to get in on early Mickey Mantle cards. 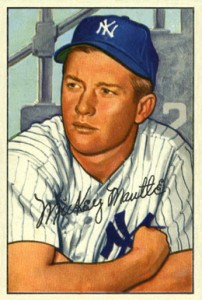 Outside of the T206 Honus Wagner, the 1952 Topps Mickey Mantle is probably the most recognizable and talked about baseball cards of all-time. 1952 Topps Baseball ushered in the modern era of collecting, offering stats, logos and a larger format. Although Topps released a set in 1951, it's this set that's considered groundbreaking. Released in several series over the course of the season, the 1952 Topps Mickey Mantle is part of the rare high series, making it all the more valuable. This is a card that will always be valuable and command lots of attention. High-grade copies of the card have approached $300,000. 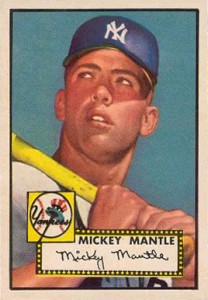 From a visual standpoint, 1953 Bowman Color is one of the greatest sets of all-time, delivering photograph instead of illustrations. Mantle doesn't come with typical framing as he's off to one side. But the composition still works. It gets his whole upper body in the frame. Also the blue sky and tinting further adds to the nostalgic appeal, even if you are too young to have seen the Yankee legend play. 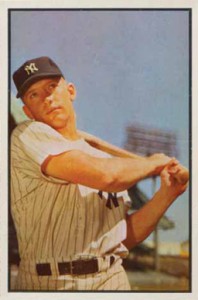 Let's be honest, while Mickey Mantle is pictured on this card (barely) and his name is on the back, this is really a card that focuses on Hank Bauer and Yogi Berra appearing to wait for his nails to dry. 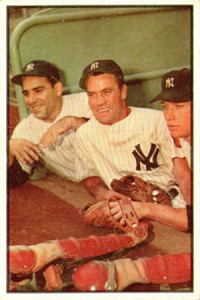 Mantle's second card from Topps is, arguably, his most attractive. Painted by Gerry Dvorak, the portrait zooms in on the slugger's face. The result is a piece of cardboard perfection. Although lifelike and instantly recognizable as Mantle, there's something stylistic about it. Mid-range copies graded by PSA, SGC and BVG normally hit four figures while higher-grade versions go much higher. A PSA 8 1953 Topps Mickey Mantle sold for $24,550 in November, 2014 on eBay. After signing a deal with Bowman, Mantle wouldn't appear on a Topps card again until 1956. 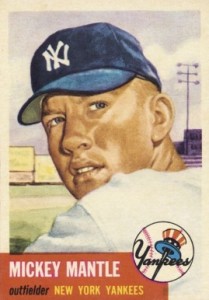 Over the years, Mickey Mantle has been a baseball card exclusive for several companies. While most of these deals have come in the modern era, his first came early in his playing career. The 1954 Bowman Mickey Mantle is the first of two years where he appeared in a Bowman set but not Bowman. It's another nice painting as opposed to the photo from the previous year. 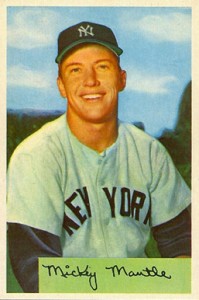 Showing a sign of the times, 1955 Bowman Baseball used a horizontal design that mimics the look of an early color television. The back incorrectly lists his birthday as October 30, 1931, which is ten days too late. This error was never corrected, though. For the second year in a row, Mantle was a Bowman exclusive. However, this was the final year for the company as Topps bought them out. 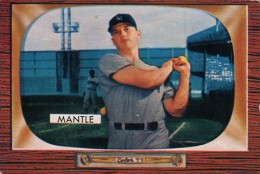 The horizontal 1956 Topps Baseball design is a classic. And while the portrait isn't as strong as the one used in 1953, the addition of the leaping shot makes for a dynamic card. Mantle is part of the second series, which makes it easier to find than the high numbers. Completists may want to chase both versions of the 1956 Topps Mickey Mantle. It can be found with both white and grey card stock on the back. 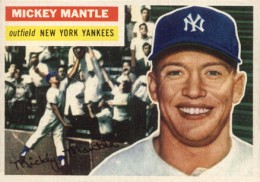 It might not be the brightest or cleanest photo of Mantle committed to cardboard, but it is the first time Topps used him without artwork. It also captures his sweet swing all the way from the top of his stirrups all the way through to the top of his cap. 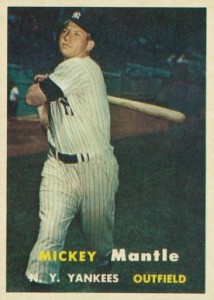 Given that their home run totals dropped significantly from the previous year, it's a little strange to see Mantle and Berra paired for their power numbers. Even with lower totals, though, both were still among baseball's top sluggers. And today, it's primarily about their respective careers and not any one season. 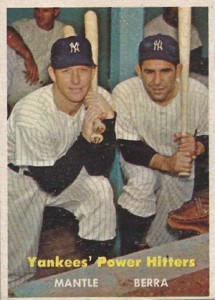 The 1958 Topps Mickey Mantle keeps it simple. It's got a huge portrait of the Yankees Hall of Famer cast against a solid orange background. This is definitely an instance where less is more comes into play. Coming towards the start of the checklist, rarity doesn't create a premium. 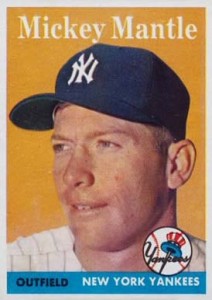 It's tough to complain about a card that pictures two true legends. Appearing for the first time together on a Topps card, Mantle and Hank Aaron played against one another in the 1957 World Series -- one that Aaron's Braves took in seven games. 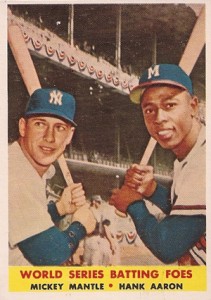 If the stars and bright red background don't get your attention, it's hard to say what will. And while the All-Star card has a memorable look, it's much more affordable than Mantle's regular 1958 card. This is almost always the case with subset cards. 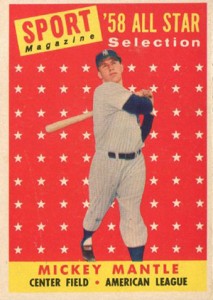 The final main Mickey Mantle card of the decade takes you back to a Rockwellian place where kids crowded around knotholes to catch a free peek at their diamond heroes. Like a lot of Mantle's other early cards, he's looking young and relaxed. 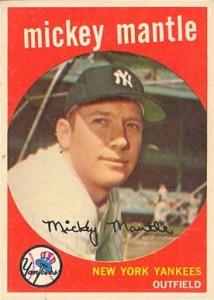 The 1959 Topps Baseball Thrills captures several memorable moments using artwork. However, this artwork can come across as plain. That's the case with Mantle's card, which highlights his final home run of the 1958 season. As a result, it's one of the most affordable 1950s Mickey Mantle cards from Topps. 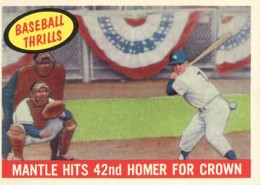 Another of the decade's more affordable choices looks much stronger. The inclusion of The Sporting News name adds something a little extra compared to their more generic All-Star counterparts. The shield frame that's overlooked by an eagle evokes a feeling of strength, further adding to its visual appeal. 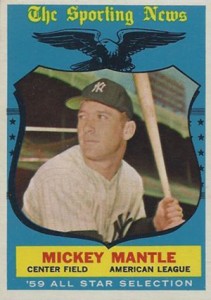 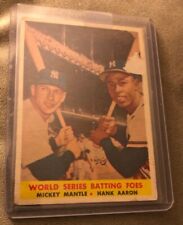 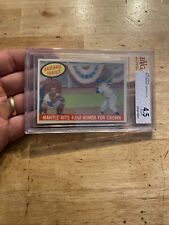 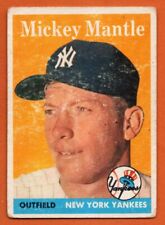 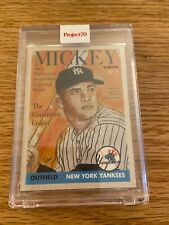 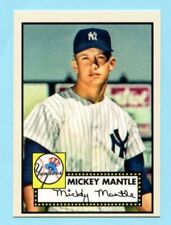 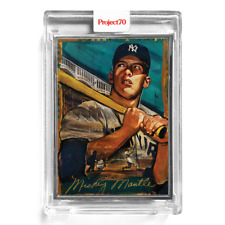 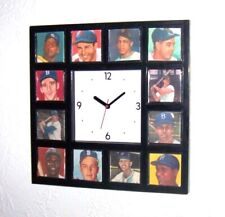 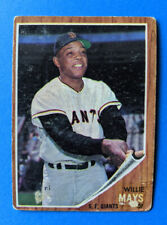 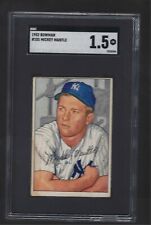 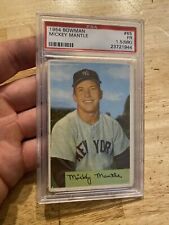