Superfractors are one of the hottest and most coveted cards in the modern hobby. Part of several Topps brands that use chromium, by they're very nature they are unique. For each Superfractor, there is just one copy. As a result, even common players can fetch tidy sums on the secondary market. But when you look at the top 10 Superfractor sales of 2014-15, you're going to see some highly touted rookies and rarely seen gems of current stars.

The limited nature of the Superfractor cards makes them highly collectible and often very expensive. Combine the  limited supply with high collector demand and you've got some astonishing realized prices.

Below is a list of the top 10 Superfractor sales on eBay from February, 2014 through early February, 2015. These are based on completed listings where, hopefully, the cards were paid for. 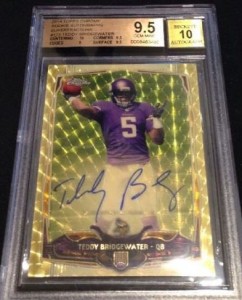 The rookie quarterback showed continued development for the Minnesota Vikings as the season progressed. Initially overlooked by many collectors, Bridgewater was overshadowed by the pre-season hype surrounding Johnny Manziel. The recent sale of this Superfractor is a testament to the fact that collectors are starting to show a higher regard for Bridgewater's potential. 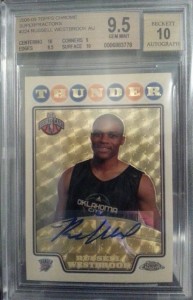 This 2008-09Topps Chrome card of the Oklahoma City Thunder point guard is arguably his most coveted rookie card. Fans of the Thunder are still hoping that the dynamic tandem of Westbrook and Kevin Durant will eventually bring the franchise an NBA Championship. 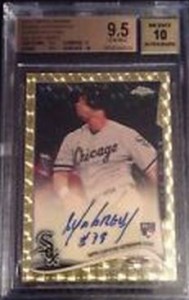 It should come as no surprise that one of Jose Abreu's cards made the list. The Chicago White Sox slugger won AL Rookie of the Year honors and was selected to the All-Star Game. His statistics were remarkable despite missing several weeks due to injury. He finished the 2014 season with a .317 batting average, 36 home runs and 107 RBI. This card received a Gem Mint 9.5 from BGS with the autograph getting a 10.

The young Minnesota Twins prospect is already viewed as a potential franchise cornerstone. Prospectors have been collecting and accumulating Buxton's cards over the last couple of years with the hope that some of them might bring a highly profitable return. In addition to the card being one-of-a-kind, it is also autographed.

The highly touted shortstop was originally drafted by the Oakland Athletics in 2011. Russell was the key player in a mid-season trade with the Chicago Cubs in July of 2014. In return, the A's received pitchers Jason Hammel and Jeff Samardzija. Like most of the top 10 selling Superfractors of 2014, the card is signed.

The Bowman name has always been synonymous with rookie cards and key prospect cards. The Bowman Chrome brand, with its many levels of parallel Refractors remains one of the most popular brands in the hobby today. This autographed card of Cleveland Indians prospect, Clint Frazier received a grade of a Gem Mint 9.5 from BGS.

This card is so nice that it made the list twice. Approximately three months after this card's initial sale in September, it was flipped by the buyer for a profit of $1,000. 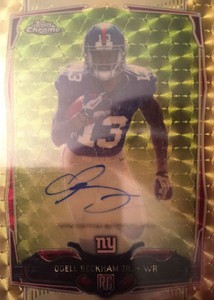 Odell Beckham Jr. became a weekly highlight reel during his rookie season. His 91 catches for 1,305 yards and 12 touchdowns helped him win numerous offensive awards. In the hobby, he quickly solidified himself as the key offensive rookie of his draft class. This was the top card in one of the year's most widely collected products. When it surfaced, it created quite a stir.

The Gem Mint 9.5 grade helped this card of Frazier's sell for a lofty sum last spring. The Indians have a passionate fan base and a loyal collector following. It is not surprising that two of his cards made the top ten list.

This should come as a surprise to most collectors. The fact that a back-up running back with just 52 professional carries and zero touchdowns could have a card exceed five figures is certainly peculiar. Drafted in the second round of the 2013 NFL Draft, the Seattle Seahawks selected Michael 62nd overall. Apparently somebody has very high hopes for the running back out of Texas A&M.