The road to NHL superstardom didn't come quickly or easily for goalie Tim Thomas. Drafted by the Nordiques in the 9th round of the 1994 draft, Thomas would spend several years bouncing around leagues in North America and Europe honing his skills. He'd have to wait until the 2002-03 season to make his NHL debut. After just four games with the Bruins, it was another couple years before the Michigan-native got another taste of the big time. Within a few years he established himself as one of hockey`s elite goaltenders, capping it off with a Vezina Trophy in 2008-09.

Collectors have several Tim Thomas hockey cards to choose from, as far as rookie cards go. Most are very reasonably priced, to boot. Budget-minded options include the goalie-themed 2002-03 Between the Pipes and the retail version of 2002-03 Pacific Crown Royale, which can be differentiated from the hobby version due to its lack of serial number. Mid-range Thomas rookie cards vary from the 2002-03 Upper Deck, which actually outpaces many of its serial-numbered cardboard counterparts, 2002-03 Parkhurst and 2002-03 SP Authentic. Thomas has three rookie cards limited to 100 copies or less: 2002-03 Be A Player All-Star Edition, 2002-03 Pacific Private Stock Reserve and 2002-03 Pacific Titanium.

Thomas also has some intriguing early non-rookie cards. He appeared in Upper Deck's Swedish set in 2000-01. The Boston net minder also had a rookie redemption from 2001-02 SPx that was limited to 1,250 copies. Finally, Thomas had one memorabilia card inserted in packs of 2002-03 in Between the Pipes. 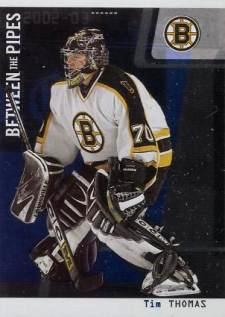 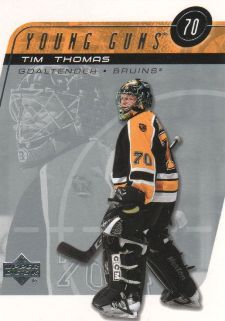 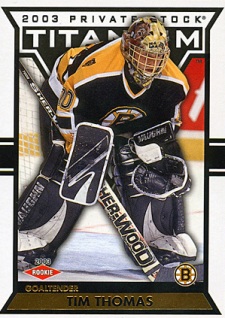