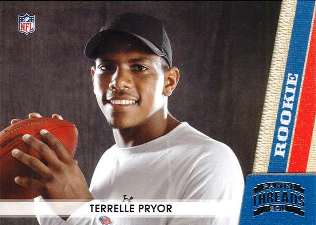 Terrelle Pryor has faced some serious roadblocks on his way to the NFL, but it seems he's finally made it. Although he'll start his career serving a five-game suspension for issues stemming from his sale of memorabilia while at Ohio State, Pryor is now a member of the Oakland Raiders. By way of the Supplemental Draft, the Raiders gave up a third round pick in the 2012 NFL Draft to get the promising athlete. Although he possesses similar speed and athleticism to other multi-threat quarterbacks, Pryor has issues with accuracy which will hold him back in the NFL if he doesn't improve considerably.

Pryor will spend a large part of this year on the bench learning, but at this point, it seems clear that Jason Campbell is not the Raiders' long-term answer at quarterback. Although many feel it was a reach, using such a high pick on the quarterback guarantees that the Raiders expect big things from Pryor and that they're continuing to focus on speed.

Now that Pryor has cleared this first hurdle, collectors can at least count on seeing him in upcoming NFL products. His hobby interest should stay low at first but fans and collectors love a good comeback story so once he gets his shot, all will be watching with interest. Based on his problem areas, it is hard to view him becoming an elite quarterback in the NFL but his natural talent will still give him options. His speed and size could lead to a tight end/wide receiver position and he does appear open to other possibilities besides quarterbacks. Whatever the case may be, for now, the sky is the limit and collectors can rejoice at the prospect of another player with tremendous upside.

Pryor has already appeared on several football cards from both Upper Deck and Panini. He's scheduled to be in 2011 Panini Threads, which is slated for release this week.