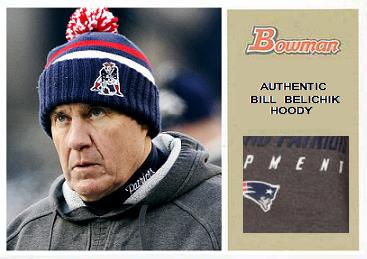 The rookie card is the holy grail of sports cards. Autographed bats, balls, helmets, jerseys, pucks, and pictures all take a back seat to these kings of cardboard. A rookie card represents the first chapter in a story. It could be the story of greatness like Peyton Manning, or the story of absolute failure like Ryan Leaf.

The greatest travesty in cards occurs when a great player's rookie is captured on cardboard that is anything but great. Some are designed poorly, some are overprinted, and some simply weren't made at all.

If I had a Delorean or Flux Capacitor to install into my own car, the following cards would exist:

1.1989 Playoff Contenders Barry Sanders Auto RC
The1989 Score Barry Sanders RC is perhaps the greatest crime of the overprinting era. A card so over-printed that even a PSA 10 books at just $200! Even Barry himself couldn't juke, spin, and carry this one into the Hobby Hall of Fame! The dream would be a Playoff Contenders Auto (which debuted in 1998); a card worthy of arguably the game's greatest running back.

2. 1987 Bowman Chrome Greg Maddux Auto RC
One of the greatest pitchers of all-time and perhaps the smartest player to ever throw a baseball, Maddux defied all odds. He was too short, wore glasses, and had a fastball that rarely hit 90 mph on the radar gun. He looked like someone who collected baseball cards, not someone who won 355 games in the steroid era! His 1987 Rookies are all overprinted and aren't easy on the eyes. Late 80's cards are among the ugliest cards ever produced.

His best Rookie in my opinion is his 1987 Topps Traded Tiffany Rookie. Remember that buddy of yours that created his “dream pad" in his parent's un-finished basement by nailing wainscoting onto support beams? Well, that buddy was Topps and the year was 1987. A Bowman Chrome Auto would perfectly capture the greatness that is Greg Maddux.

3. 1978-79 Upper Deck Wayne Gretzky Young Guns RC
A tradition unlike any other in sports, “Young Guns" (not the Masters). This is more of a tribute to one of the best running series in all of cards. With “Young Guns", Upper Deck has created something no other sport has, a “non-auto" rookie that is affordable to the everyday collector, yet extremely valuable. How cool would be to put a Gretzky Young Guns next your Crosby, Ovechkin, and Malkin?

4. 1996 Playoff Contenders Ray Lewis Auto RC
Pitchers in Baseball and Defensive Players in Football have gone under-appreciated for far too long. Ray Lewis is one of the greatest players the NFL has ever seen and one of the greatest competitors in the history of sports. His 1996 Bowman's Best is a quality rookie and one that I am proud to have in my collection. The fact that Contenders debuted 2 year later is why this makes the list. A 96' Playoff Contenders Ray Lewis Auto would give Defensive players a card worthy of playing on the same field as a Manning or Brady Contenders Auto.

5. 1991 Bill Belichick Hoody Relic Auto
Tom Landry's Hat, Vince Lombardi's Glasses, Steve Spurrier's Visor, Bobby Knight's sweater, Denny Green's Wind Breaker, and Bill Belichik's Hooded Sweatshirt. Whether you love or hate Belichikdoesn't change the fact that he is both great andun-conventional. As one of my all-time favorite coaches, I would gladly buy a 120-point magnet case to fit this card into my collection. This begs the question, where did all the coach cards go? Al Davis probably had something to do with it, I can't prove it, but I can prove that Tom Cable is an NFL coach.

6. 1996 Upper Deck Tiger Woods RC
No matter how hard I try, I can't fool myself into believing that one of these cards is Tiger's Rookie:

One is just dumb, One is too hard to buy, and the other, a 5th year card! This one is truly no ones fault. It's an example of the industry being caught off-guard. Without Tiger Woods, there would be no 2001 Upper Deck Golf Cards. I still consider Michael Jordan's 84'-85' Star Rookie to be his true rookie, not his 86'-87' Fleer. The closest thingto a Tiger Rookie is his 96-97 Grand Slam Ventures Gold Foil. I personally own this card, but it was the single most confusing card I've ever bought. There is a 97'-99' version that people cut out of Posters and sell, then there are the real versions that have been trimmed to create the illusion of Mint condition. All these issues would be eliminated if a 1996 Upper Deck Rookie existed. And Yes, I do realize that Tiger has done many bad things, but I don't think that means we should destroy him.

7. 1995-96 Exquisite Collection Kevin Garnett JSY Auto RC
Personally, I can't stand the presence of brands like “Exquisite" and“The Cup". People who can afford such indulgences live in a whole different collecting bracket than I. But, this is the one instance where I would make an exception. Kevin Garnett is my all-time favorite basketball player and it's not even close! After 11 years of watching him scratch and claw for wins in spite of Kevin McHale's idiocy, I would be more than willing to fork out the necessary money to acquire this card as a tribute to both my collection and KG.

8. 2001 Bowman Chrome Chase Utley Auto RC
Utley could very well end his career as the greatest 2nd baseman of all-time. He's gritty, clutch, andhas both the ring and the numbers to be in the conversation. An MVP eludes him only because of the position he plays. A quality Auto Rookie eludes all of us because of something called "Bowman Draft". I still get mixed up when it comes to BPP, BDP, BCPP, BCDPP, or whatever letters they put on back to tell you which Bowman Set they are part of. In 2002, a Bowman Auto came out, but no matter how long you stare at it, the year never changes to 2001.

9. 2001 Bowman Chrome Ichiro Auto RC
This one would be much higher if it weren't for the presence of his SPx and Ultimate Collection Auto Rookies. Unlike the Utley, there's no blame to place for this one not existing. Like Tiger, Ichiro was a cultural phenomenon that caught everyone off guard. Still, adding this to the Pujols and a fictional Utley would make 2001 Bowman Chrome one of the single greatest sets of all-time.

10. 1992-93 Shaq Topps Finest RC
Although extremely lazy at times, Shaq is one of the greatest players of all-time. Unfortunately, he entered the NBA the year before Topps Finest debuted. Because of bad timing, adding a Shaq Rookie of value is a confusing task. His best rookie year card is considered to be his Stadium Club Beam Team. That being said, “Beam Team" was an insert, which disqualifies it from being a true Rookie Card. Witha Finest Rookie in play, both Shaq fans and rookie collectors would have a clear and obvious choice.