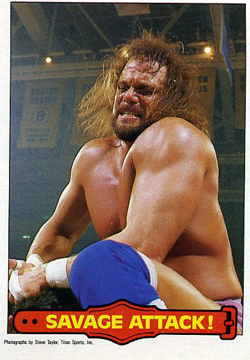 Randy Poffo, better known as "Macho Man" Randy Savage, died this morning near Tampa, Florida after being involved in a car accident. It is being reported that he had a heart attack while driving, which resulted in the crash. Savage was 58-years old.

Savage is best know for his days with WWE, headlining multiple Wrestlemania pay-per-views including Wrestlemania IV where he beat the "Million Dollar Man" Ted DiBiase in the finals of a tournament for the vacant heavyweight title. With his manager and real-life wife, Miss Elizabeth at his side, Savage won wrestling fans over with an intense, high-flying in-ring style and a charismatic persona. His trademark sunglasses, long hair and flamboyant fashions also made the Macho Man stand out among his peers. His match with Ricky "The Dragon" Steamboat at Wrestlemania III is regarded as one of the greatest matches in professional wrestling history.

Savage found some success outside of wresting, most notably as the pitch man for Slim Jim. He also appeared such films as Spider-man and Bolt. Savage even tried his hand at rap music. The results weren't pretty.

"Macho Man" Randy Savage has appeared on many trading cards over the years. His first appearance was in O-Pee Chee Pro Wrestling Stars Series Two, released in 1985. Savage also has two certified autographs. The first, serial-numbered out of 500, was inserted in the 1994 Action Packed WWF set. Topps included a Savage autograph in WCW Nitro in 1999.