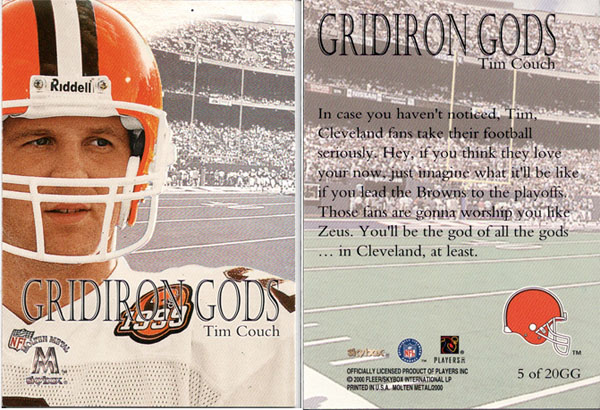 According to the Back of the Card:
In case you haven't noticed, Tim, Cleveland fans take their football seriously. Hey, if you think they love your now, just imagine what it'll be like if you lead the Browns to the playoffs. Those fans are gonna worship you like Zeus. You'll be the god of all gods...in Cleveland, at least.

Thoughts:
I wonder who held their job longer, Tim Couch or the guy who wrote the "epitaph" on the back of the card. The card reads like one half of a drunken football argument! And yes, that is an uncorrected grammar error. Who would ever thought that an actual "Zeus" card would be worth more than any Tim Couch card (2010 Allen & Ginter)?

According to the Back of the Card:
If you can imagine the power and speed of an avalanche, you can picture Courtney Brown's talent. His strength caused teams to constantly double team him; his speed is comparable to many NFL running backs. The number one overall choice in the draft has been compared to another defensive end picked number one: Bruce Smith (1985)

Thoughts:
I can't believe the next Bo Jackson wasted his career sucking at Defensive End! Now it makes sense why he was so slow, he was using his "avalanche" speed running up hill, thank god (Tim Couch) the coaching staff got fired for this! 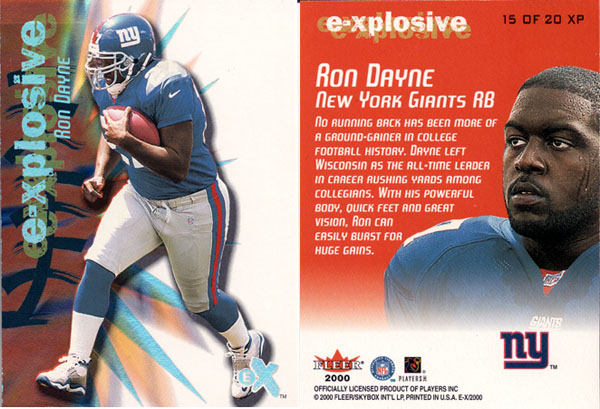 According to the Back of the Card:
No Running Back has been more of a ground-gainer in college football history. Dayne left Wisconsin as the all-time leader in career rushing yards among collegians. With his powerful body, quick feet and great vision, Ron can easily burst for huge gains.

Thoughts:
Had he been able to "easily burst for huge gains", I probably would have an extra fantasy football championship ring on my hand right now! On a side note, would Ron Dayne be a "poor man's LenDale White" or would LenDale White be a "poor man's Ron Dayne"? At least Tiki Barber didn't divorce himself from "thunder & lightning" the way Chris Johnson did with "Smash & Dash". 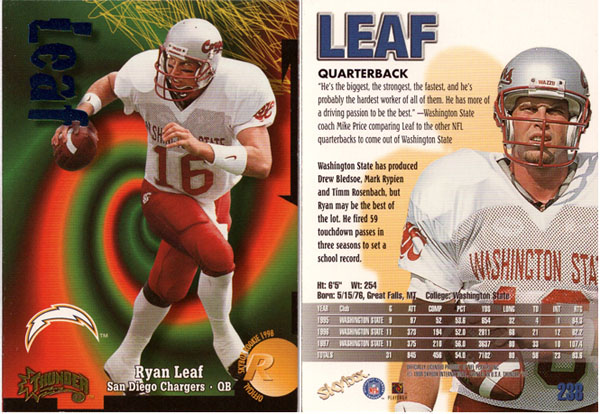 According to the Back of the Card:
"He's the biggest, the strongest, the fastest, and he's probably the hardest worker of all of them. He has more of a driving passion to be the best." -Washington State Coach Mike Price Comparing Leaf to the other NFL quarterbacks to come out of Washington State.

Thoughts:
He could have been the next Jeff George with a skill set like that.....That's a bold statement by Mike Price to say that Ryan Leaf was faster than Washington State alums Drew Bledsoe and Mark Rypien. I would like to see someone arrange that race so I could judge for myself. It would also prove who has more "driving passion" based on who shows up for the race. Ryan Leaf only got 10-years probation for stealing pills, so he would have no excuse for not showing up.

According to the Back of the Card (List of qualities both QB's possess):

Thoughts:
Amazingly this card is completely 100% "factually accurate" if you do a little "Michael Moore" dot connecting!  Hats off to the boys at topps on this one. Below I connected the dots:

My favorite is definitely the Ryan Leaf card because of his coach’s quote on the back.

Ron Dayne’s picture by itself should have been a red flag….it looks like he is speed walking!

I love the drunken argument on the back of Couch’s card, I don’t know what else that would be either. The way he seems to at first call out Couch, then tell him he can be Zeus is halirous