The Milwaukee Bucks have a long and not entirely unsuccessful history. Since joining the NBA in 1968, the franchise has won 13 division crowns and two conference titles and even managed to snag one NBA championship back in 1971. Eight Hall of Famers, including the likes of Kareem Abdul-Jabbar and Oscar Robertson, have suited up for the team.

Milwaukee's recent history hasn't been quite as illustrious, as the Bucks seem to be mired in a constant state of mediocrity. There's little question that the franchise has one of the lowest profiles among the major U.S. sports leagues, and is very likely to be missed when asking a casual sports fan to name all of the NBA teams.

That same lack of recognition has carried over to the world of basketball cards as well, at least for the past decade. The Bucks have had a few minor hobby stars like Ray Allen and Michael Redd, and 2005 No. 1 overall pick Andrew Bogut enjoyed a brief burst of activity during his rookie campaign, but that's about it. 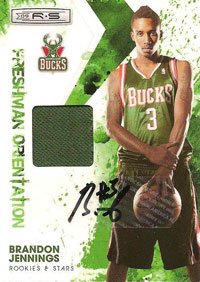 The bright glare of the hobby spotlight is finally shining on the Bucks early in the 2009-10 season, though, thanks to rookie guard Brandon Jennings. Becoming the youngest player in NBA history to score 50 points in a game, as Jennings did when he dropped 55 on Golden State on November 14, has a tendency to catch the attention of basketball collectors everywhere.

The 20-year old Jennings took an unorthodox route to the NBA, skipping college and heading to Italy to play for Lottomatica Roma. His playing time in the Euroleague was inconsistent, and scouts were divided over whether the move was going to pay off once he returned to the U.S. On pure talent he rated in the top five among 2009 draftees, but he was still around when Milwaukee picked at No. 10 overall.

Jennings wasn't the most anticipated newcomer or even the most heavily hyped prospect to play in Europe last year, with collectors preferring top pick Blake Griffin or flashy Spaniard Ricky Rubio, respectively. But with Griffin sidelined early with an injury and Rubio still playing overseas, a void was created that Jennings has filled with style.

Through nine games, Jennings is easily leading all rookies by averaging over 24 points per game, and he's shooting over 50 percent from behind the three-point arc. He's also getting his teammates involved by dishing out nearly six assists per game, and he's contributed on the boards as well. His first career triple-double seems like just a matter of time.

Somewhat appropriately, the rookie who played in Italy is entering the league at the same time Italian manufacturer Panini begins its run as the NBA's lone trading card licensee. He already has several Panini-branded rookie cards in the marketplace, and his first autographed rookie, from the recently released Rookies and Stars Basketball, is certain to be extremely popular.

Topps and Upper Deck both managed to print several Jennings rookies as well before they exited the basketball cards. None of them stand out as ones that will soar to exorbitant values, but his cards from time-honored sets like Topps Chrome and the base Upper Deck brand should still be plenty desirable.

The season has a long way to go, and Jennings could hit the wall at some point like many rookies before him. But he's already turned the heads of collectors toward Milwaukee, and that's an accomplishment in and of itself.