Legalese translation - The entire lawsuit basically boils down to this—Upper Deck wants to prevent Blowout Cards from selling any of its new products until those products are 90 days old.

On July 20, Blowout Cards escalated the battle by counterclaiming (i.e., bringing its own suit against Upper Deck) for, among other things, antitrust violations. Now, I've been involved (as a lawyer) in antitrust lawsuits, and because of that, my first thought was, “This suit is going to be expensive."

Antitrust lawsuits are factually and legally challenging. To prove their cases, each side must review millions of pages of documents from all parties, and then utilize economic experts to “reconstruct" the market to show how the conduct of the alleged monopolist is either legal or illegal. Antitrust law is also a complex, niche area that requires specialist lawyers. This is because antitrust law stems from two acts—the Sherman Antitrust Act and Clayton Antitrust Act—passed a century ago (in 1890 and 1914 respectively). These two statutes have been interpreted, reinterpreted, reexamined and modified over the last 100 years by numerous courts, including the Supreme Court.

Legalese translation - Lawyers, and their experts, tend to work on an hourly basis and charge hundreds of dollars an hour. Therefore, antitrust lawsuits cost a lot of money.

Whether this argument will carry the day depends on whether Blowout Cards' attorneys and experts can prove that competition has been “unreasonably" constrained. “Unreasonably," unfortunately, is one of those nebulous legal terms that is open to interpretation.

Legalese translation – Experts on both sides will vehemently argue with charts, graphs and fine-tuned PowerPoint presentations that the distribution agreement is either a restraint on free trade (Blowout Cards' position), or is not (Upper Deck's position) and will vehemently argue that the other side's expert is completely wrong. Then, the judge or jury gets to decide in a popularity contest, which expert is correct.

1) Upper Deck has 100 percent of the market with respect to the manufacture and distribution of National Collegiate Athletic Association (NCAA) sports trading cards across all sports.

2) Upper Deck has 100 percent of the market with respect to the manufacture and distribution of Major League Soccer (MLS) sports trading cards.

4) Upper Deck controls a 100 percent share of the market with respect to the manufacture and distribution of sports trading cards that include authentic autographs of famous athletes such as Tiger Woods, Michael Jordan, LeBron James, Wayne Gretzky, Bobby Orr, Gordie Howe and Landon Donovan.

Third, what I find to be the most intriguing argument, is Blowout Cards allegations that Upper Deck illegally “ties" the purchase of products together. “Tying" occurs when a company makes the sale of one type of good conditional on the purchase of a second type of good. Tying arrangements are often illegal if the products are not naturally related. As the ever trustworthy Wikipedia points out, an example of tying is “requiring a bookstore to stock up on an unpopular title before allowing them to purchase a bestseller."

Here, Blowout Cards alleges that Upper Deck is guilty of tying because it required the purchase of the “undesirable, non-premium" 2009 UDX baseball trading cards if a retailer wanted to sell the desirable and premium 2009/10 Exquisite basketball trading cards.

Not that Wikipedia should be relied upon as a case determinative legal factor, but Wikipedia's book scenario sounds pretty close to Upper Deck's UDX/Exquisite scenario.

As compared to the first two complicated arguments discussed above, I like Blowout Cards' “tying" argument the best because it is easy to explain to a judge/jury, and easier to understand than “unreasonable" restraints on trade or “market power." When faced with an ultra-complex case, normally the lawyer who simplifies the issues the best will win.

Upper Deck will respond to Blowout Card's counterclaims in the very near future. It will be interesting to see at least the outlines of Upper Deck's arguments, but its full position won't emerge until later in the case.

Most cases, however, settle, and I expect this case will follow that route, too (it's just too expensive for both parties). Also, in my experience, I find it's best for companies to develop a business solution together, rather than let a stranger (the judge) or six to 12 strangers (the jury) dictate a business decision for them.

Hopefully they'll be able to work out a business solution that helps the card collecting community because the status quo now seems to be hurting nearly everyone. By excluding Blowout Cards, Upper Deck is not only causing the price of its products to be higher initially for consumers, it is also hurting its own sales. Internet companies like Blowout Cards move a great deal of volume, and they do that by purchasing a lot of Upper Deck product.

It is counter-intuitive for a card company to be able to increase its sales by prohibiting one of its largest customers from buying its products when they're first released (and when demand is the highest). This prevents consumers from getting the best deals on Upper Deck products until those products are 90 days old. Given how the economy is, consumers are limited on their recreational or hobby purchases anyway, and requiring consumers to pay more now just seems unfair.

Legal conclusion – As a lawyer, I want this fight to continue because I find it fascinating, and it could define what is acceptable for future distribution agreements. As a consumer, all I care about is buying goods for the lowest price possible. That means the sooner this case settles the better it is for my wallet, other consumers like me and the companies involved, basically, everyone except for the lawyers. 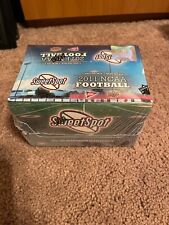 Paul, that was an interesting read. Like you, I have a morbid curiosity to see how it plays out, but at the same time, I’d prefer it just resolve as quickly as possibly. After your clear explanations, I can’t see how any side wins in this. Blowout has to recoup legal expenses somehow, and that will be through higher prices. Likewise for UD. Seems the customer always loses…

Blowoutcards is dedicated to continuing to provide the level of service and competitive prices our customers have become accustom to.We are confident that our customers share our passion for this hobby .We did hear from hundreds of collectors and dealers at the National and thank everyone for their support.