Home » Features » Behind the Scenes with 2012 Topps Strata Football 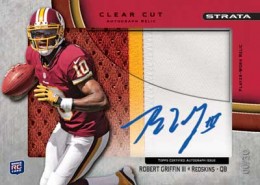 With so many companies making dozens of different sets each year, keeping things fresh can be a challenge. Coming up with something new is even harder, at least if it's going to be successful. 2012 Topps Strata Football marks the launch of of the company's latest brand.

One of the set's key focal points are layered acetate cards that have a 3-D look to them. This idea isn't entirely new to the hobby but through a series of tweaks and additions, Topps has given it a different spin.

We caught up with Topps Brand Manager, Kevin Eger, over email to discuss how 2012 Topps Strata came about and what collectors can expect.

Cardboard Connection: How did the idea for Strata come about?

Kevin Eger: When first putting together the ideation for this product, we asked ourselves what elements would make for the ultimate rookie autograph relic card. Eventually, we came to agreement: a huge relic swatch featuring a hard-signed autograph with strong attention to the player image. Once we determined that using a layered approach, creating scope and depth so each key element would compliment and enhance one another, we had a concept to really brand an entire product around.

CC: What should collectors be looking forward to?

KE: The overall design, look and feel of the cards, as well as the technology used for the Clear Cut and Strata Signature cards should make for a fun and unique break. 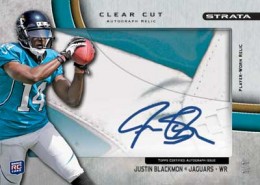 CC: Are you able to describe how the Clear Cut Autograph Relics and Strata Signatures been constructed?

KE: Simply put, the Strata Signatures are constructed from several layers of material that feature acetate as the card front, then a spacer layer, followed by another layer of acetate, then one more spacer layer, which is finally backed by a jumbo jersey swatch.

The Clear Cut Autograph Relics have less depth and layers by featuring a jumbo jersey swatch trapped underneath an acetate card front with a die cut window to feel the relic.

CC: With so many football sets this year, what makes 2012 Topps Strata Football stand out?

KE: We really feel this product has strong branding around the technology, which flows throughout the set with layered designs that give the cards a sense of scope and depth.

CC: Have there been any unexpected challenges putting the set together?

KE: Yes, the Research and Development process proved to be challenging when trying to execute exactly how we envisioned the Clear Cut and Strata Signature cards to be produced. There were several rounds of samples over a long period of time until we were satisfied with the end results. 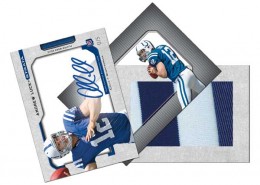 CC: Which part of the set are you most proud of or excited about?

KE: The Strata Signature Rivet Patch Parallel cards might have ended up better than we had originally imagined.

CC: While acetate has been around for more than a decade in the hobby, why do you think it has seen such a resurgence in the last while?

KE: With so many products in the market place, it's refreshing to see a change of pace in technology beyond cardboard. If done correctly, acetate cards look really sharp, and our goal was to incorporate autograph and relic content that complimented all three elements together.

CC: The set has been delayed a little from its original target. Are you able to share why?

KE: As mentioned earlier, when dealing with new technology a lot of R&D is needed to execute as originally envisioned. Also, there was a huge initiative to execute these Clear Cut and Strata Signature cards with hard signed autographs, and it's been challenging to get players to sit down and sign this season.

CC: Are there plans to bring the Strata brand to other sports or licenses? Baseball, UFC and WWE all seem like natural fits.

KE: I think we'll have to seen how this release is received in the category, but the football brand team would be flattered if it's decided to expand Strata across sports.

CC: Any surprises collectors should be watching for?

KE: The brand team has taken extra steps to include noteworthy parallels for certain Clear Cut Autograph Relics subjects, which include unique memorabilia such as spikes, gloves, and even socks!

2012 Topps Strata Football hobby boxes deliver one of the Clear Cut Autograph Relics as well as one additional rookie autograph and a rookie relic. 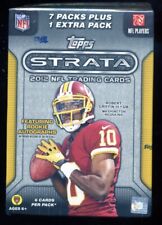 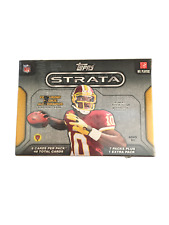 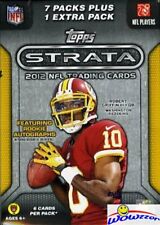 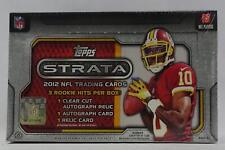 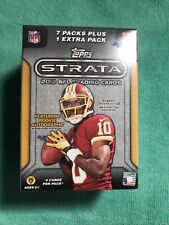 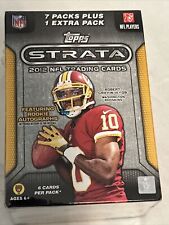 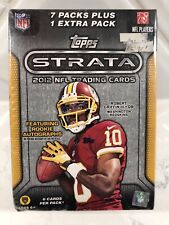 SO why are they making so many sets?
I certainly understand the low end, mid end and high end, but Topps seems to have made like 6 mid ends. Even Chrome has turned out to be not so high end. And Prime, Platinum and Strata seem to be about equal as well

Im so excited for Strata to come out, it looks Amazing!!!

and how many redemptions will there be. it seems like there are more and more redemptions in every release