The most important skill a future lawyer takes away from law school is issue spotting. In other words, when given a hypothetical situation, how many potential legal problems can you identify? This helps lawyers protect their clients. It's also why if you have a lawyer in the family, they probably annoy you when they visit your house (“You might want to clean up that ice on your front walk--someone could get hurt.").

Baseball cards provide good practice for issuing spotting. Everyone knows legalese is strewn all over baseball cards. You may even have a basic idea of what it means. But do you really know? Many people also interchangeably use the terms “copyright," “patent" and “trademark," so we'll address each of these areas too, just to make sure everyone is using the same definitions.

Really, you don't need a law degree to spot potential issues with baseball cards (well…some issues). All you need are a few basic definitions. Once you understand the legalese, you can have fun trying to spot the issues.

First, a quick training course. Card manufacturers and licensees love their legal symbols and legalese. The most popular symbols are: ®, ™ and ©. Each means something different:

The ® and ™ symbols focus on trademark rights. A trademark is a unique mark, logo, etc., that is used by a company or organization to differentiate itself, its products or its services from others. A good example of a trademark is the MLB logo. The MLB logo is marked on cards to show the product is endorsed by Major League Baseball. Look at a baseball card, its wrapper or box and see how many places you can find the MLB logo with a ® after it. It's everywhere. Except of course, on the 2010 Upper Deck Series 1, but we'll get to that later.

™ denotes that the owner is claiming trademark rights, but does not have a registration from the Trademark Office because the trademark registration is pending, was rejected, or the owner did not file for a registered trademark.

© - A claim of copyright. Copyright law protects original works of authorship including literary, dramatic, musical, and artistic works, such as poetry, novels, movies, songs, computer software, and architecture. It does not protect facts or ideas, although it may protect the way facts or ideas are selected and organized. The majority of content on a baseball card is protected through copyright (player photo, card design and art, potentially the selection and arrangement of statistics on the back of card, etc.).

Beyond the ®, ™ and ©, baseball cards have additional legalese.

Mentions of “licenses" means a contract exists allowing one company (the licensee) to use the property of another (the licensor). Most commonly for cards, the licensed content includes the player's image, the team name, uniform, MLB logo, etc.

And finally, if something on the card is protected by a patent, the patent number itself will be listed. Typically, the card will just read, “U.S. Patent No. X,XXX,XXX" (patents do not get their own special symbol). Now, companies do not mark products with patent numbers just to show everyone how smart they are; patent numbers are marked on products to give potential infringers notice of the patent. It's a “KEEP OUT" sign. If patent owners mark their products with patent numbers, courts assume infringers were aware of the patent, and the patent owner can collect damages starting from when the product was first marked as a “patented" product. This way, infringers can't claim they did not know about the patent because it's available for all to see.

Now that we have the definitions, let's see how we do with issue spotting. For example, let's look at the Buster Posey's 2010 Upper Deck rookie card. 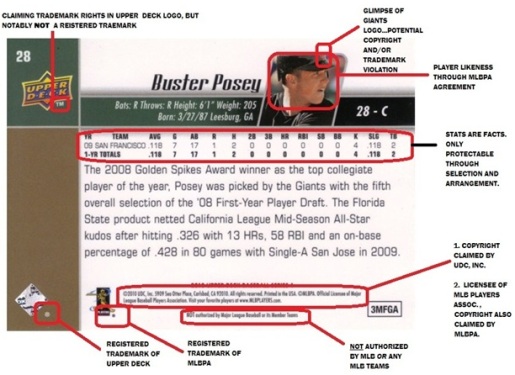 Two issues jump out on this card. First, the Upper Deck symbol in the upper left hand corner has a TM, not a ®. Why? Well, Upper Deck did not receive a registration on that mark until June 22, 2010 (from USPTO records for Registration No. 3807558). If you look at Upper Deck's current cards like its 2011 football cards, the same symbol has a ® now. So, we spotted an issue that was not an issue—Upper Deck filed for a registered trademark, but hadn't received it in time for the product release.

The second, and most important issue to spot, is that this card is explicitly not licensed by the MLB or any MLB teams. That's because in 2010 Topps was the only company to get a license from MLB. This presented a problem for Upper Deck who had a license with the Major League Baseball Players' Association (as reflected on the bottom of the card) to show players' images and use their names, but no license with MLB. So, Upper Deck tried creating cards that focused only on MLBPA's property while blocking out MLB's property. That's why when you look at the front of the Buster Posey card, the photo selected has the batter's arm across the Giant's logo, and the “SF" on the batting helmet is somewhat obscured. 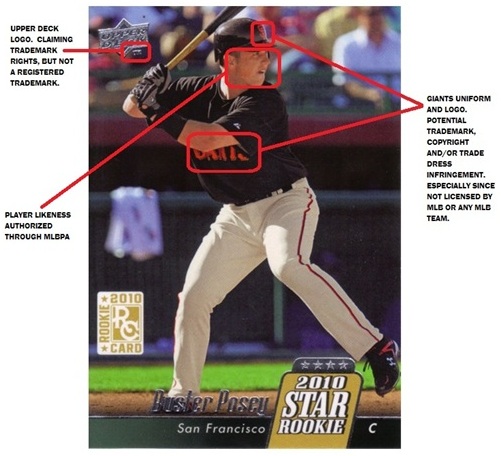 Now, this issue we spotted, was a real issue with MLB. Despite Upper Deck's efforts to obscure the team logos, MLB sued Upper Deck anyway. The MLB contended that without a license, Upper Deck was not allowed to show any MLB property (e.g., uniforms, team names, etc.). Upper Deck fired back that it did have a license with the Major League Baseball Players Association to show players, and that was all it was doing. Rather than risk a court deciding the issues, both sides settled the case. From the lawyers' prospective, I liked MLB's position better, but I do sympathize with Upper Deck. Its license with MLBPA became basically worthless—who wants to see a baseball player in street clothes?

Any card collector knows that trading cards are more than just pictures of athletes with statistics on the back; trading cards are pieces of modern Americana that tell stories. Most of the stories involve the sport or the athlete, but not the card itself. The legalese on the cards, however, can tell stories about the card and collection too. With an understanding of the legalese, you can broaden your enjoyment of your collection, and tell others not just about the player, but about the story of the card itself.