Bart Starr is one of the most beloved figures in the history of the Green Bay Packers and also a Hall of Fame quarterback. Both a player and a coach for the Packers, Bart Starr cards are very popular with collectors, especially his autographs and vintage options.

Drafted out of the University of Alabama in 1956 by Green Bay, the 17th-round pick adapted quickly and led the Packers to five titles, including two Super Bowl wins. The four-time Pro Bowl selection was the league MVP in 1966 and Super Bowl MVP in both of the Packers' wins.

With the earliest Bart Starr card debuting in 1957, collectors had options pretty soon after his pro football career began. Following the rookie release, vintage cards for Starr were consistent until his retirement in 1971. These are some of the most popular cards he has. They offer a good mix of value and design along with choices for almost any budget.

In modern times, Bart Starr autographs and memorabilia cards have seen the most interest. Although he signed frequently for card products in the 2000s, values are still strong, with more demand for his earlier autographs.

Click on the listings below to shop for specific cards on eBay.

The overall top card for Bart Starr is also his very first. Part of the 1957 Topps Football product celebrated for an appealing design and strong Hall of Fame checklist, the Bart Starr rookie card is a key piece for many collectors. 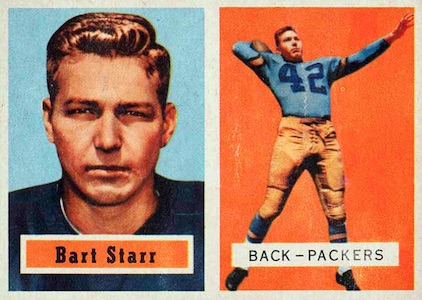 Although high grades are tough to find in 1958 Topps Football and overall card numbers are noticeably lower than 1957 Topps, the second card for Bart Starr is much more affordable. The framed green border with an oval cutout makes for a distinctive look. Also, the card has an uncorrected error on the back. The "Passing Record" section for Starr mixes up his yearly and career stats. 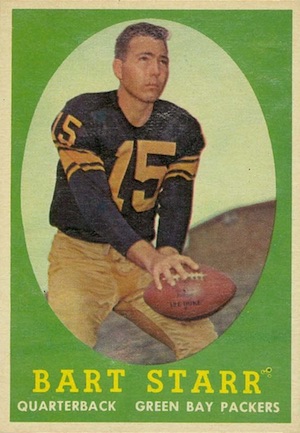 The hard-to-miss pink background makes the 1959 Topps Football card for Bart Starr immediately stand out. Adding even more color, the font used for the name alternates blue and red and is slightly askew. 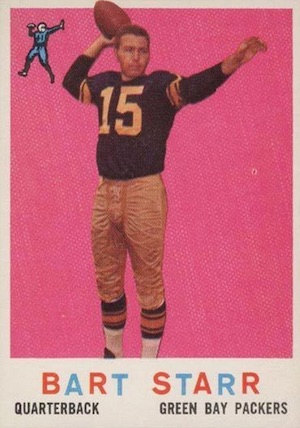 Collectors were treated to the first and only Bart Starr Fleer card from his playing career in 1961. Astute collectors will notice that the image of Wisconsin is reversed on the 1961 Fleer Football card and that is the case for all the Packers in the release. 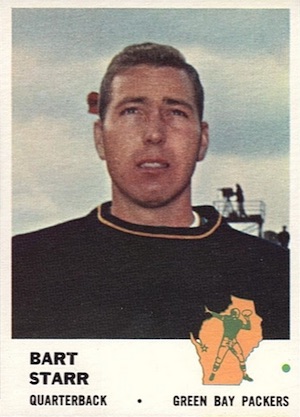 Although most vintage releases for Bart Starr are not available in huge supply, the regional 1961 Packers release from Lake to Lake Dairy is one of the most difficult to locate, especially in high grade. As one of the short prints in the 36-card set, don't expect to find too many of these green-tinted cards. 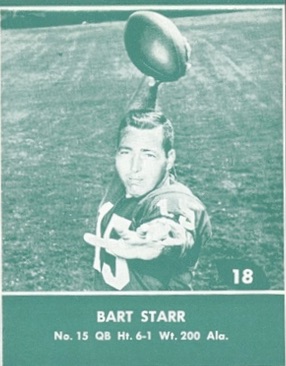 Part of the set that is plagued by the sensitive black borders, 1962 Topps remains a hobby favorite because of the appealing design and the search for high-grade examples. Combining a posed color image and black-and-white action shot, this is among the most unique Bart Starr vintage designs. 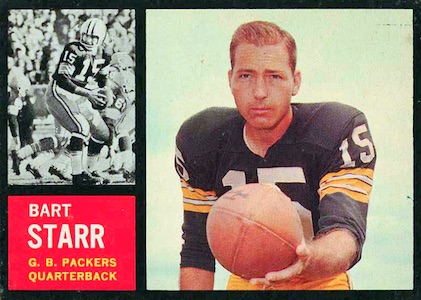 It would seem that Bart Starr really wanted to get rid of that football. The 1963 Topps Football card utilizes a very similar primary image to his 1962 card, but flips the layout. The added multi-color border gives the card a different feel and it has a more classic look. 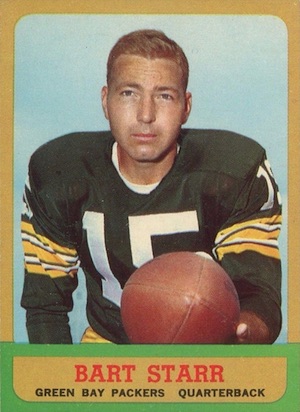 As one of the key cards from the famed 1997 Upper Deck Legends Autograph set, this signed Bart Starr card commands big bucks whenever it surfaces. Because it is also one of several short prints in the set, that does not happen very often. The bold vintage image and on-card signature make this one of the most popular Bart Starr cards of all-time. If you like the overall design, the base card is easy to locate and very inexpensive. 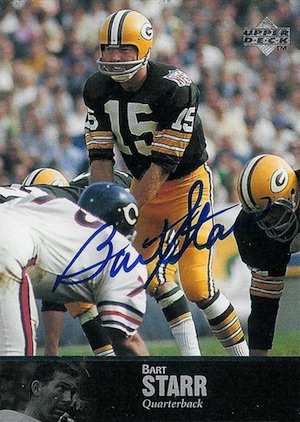 Featuring one of the first signed relic cards for Bart Starr, the Game Jersey Greats Autograph in 2000 Upper Deck boasts an on-card signature and game-worn jersey piece. While the card is hand-numbered to 200, there are two versions that are basically identical except for the card number (#GJG-BS1 and #GJG-BS2). Therefore, there are actually 400 of these cards. 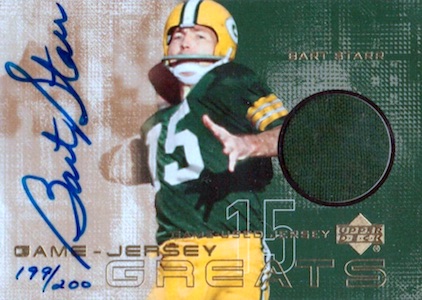 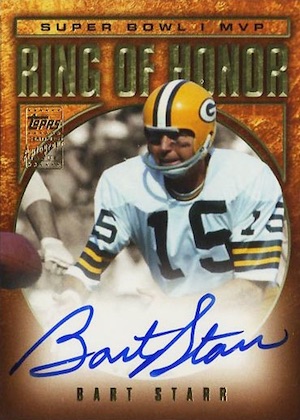