2017 Topps Now Doctor Who enters the on-demand universe! Following the customary Now formula, Doctor Who collectors are able to purchase print-to-order cards within the 24-hour selling window via Topps.com.

The inaugural set begins with massive news as BBC announced the Thirteenth Doctor will be female and portrayed by Jodie Whittaker (Broadchurch). Fittingly, this is the first real-time Doctor Who set while Whittaker is the first-ever female Doctor. 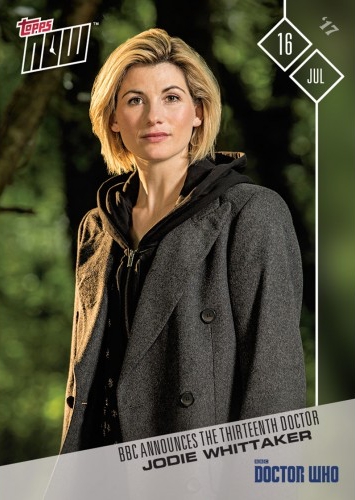 Like all the Topps Now sets, 2017 Topps Now Doctor Who is sold by the individual card, as well as in multi-card bundles. While there is no word on premium elements like autographs or relics, other releases have included these options in limited supply. Below is a breakdown of the standard pricing:

Traditionally, the cards are released either following an event or episode, however, no official announcement has been made for future releases. Final print runs are revealed after the selling period closes so collectors know the exact rarity for every card.

Be sure to check back as the 2017 Topps Now Doctor Who guide will be updated with new cards and details.

If you are looking for more choices, the popular sci-fi series already has several traditional card sets from Topps that collectors can explore. 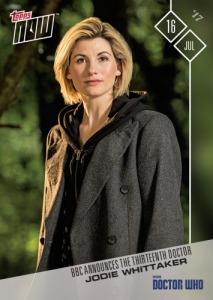