The 2013 Rittenhouse Star Trek Movies Collectors Set is about as straightforward as you can get. Although extremely expensive (it carries a $750 suggested price), it delivers what a lot of high-end Star Trek collectors hunt for -- autographed memorabilia cards from a pair of key cast members of Star Trek Into Darkness.

The 2013 Rittenhouse Star Trek Movies Collectors Set is limited to 250 copies. Nine cards preview the reboot's blockbuster sequel. However the big draw is autographed relics of Chris Pine (James T. Kirk) and Zachary Quinto (Spock), arguably the two biggest stars in the franchise's rebirth. Both had basic autographs in Rittenhouse's set based on the first film, which was released in 2009. Today, both of those cards move extremely well on the secondary market, particular Pine who sells for several hundred dollars on the rare occasions they surface.

This set is intended to hold collectors over until a full Star Trek Into Darkness set releases a few months later. 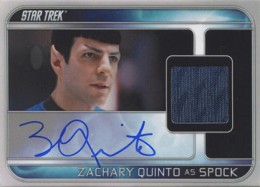