Over the years, In the Game has released several hockey sets that celebrate the legacy of the game. With 2012-13 In the Game History of Hockey, they're looking inward at the hobby itself. The ambitious high-end set mixes new cards and old.

Autographs are on cards authenticated and slabbed by PSA/DNA. They come from various sets, further sticking with the historical themes that run throughout.

Rookie buybacks aren't just from In the Game products. They come from other products as well. Unlike similar buyback-focused releases from Leaf that come with third-party grading or authentication, these cards come in an ITG slab. The case notes its connection to the set and has an ITG logo. All rookie buybacks are guaranteed authentic. Rookie buybacks date back to the hobby's beginnings with such cards as a 1911 C55 Georges Vezina, 1951-52 Maurice "Rocket" Richard and 1966-67 Topps Bobby Orr. Charting the history of the hobby, they reach to more recent offerings like the 2005-06 Upper Deck Sidney Crosby.

2012-13 In the Game History of Hockey memorabilia cards come with a tiered structure. In total, there are 145 cards in the set. The first have original artwork from Jared Kelley done directly on the card with a memorabilia swatch added. Each is limited to nine Silver versions and one Gold card. The checklist continues with similar cards done by Mike James. These also have nine Silver cards and one Gold.

The final 85 cards in the set come with artwork and a memorabilia swatch. These are limited to 30 Silver cards and 10 Gold. 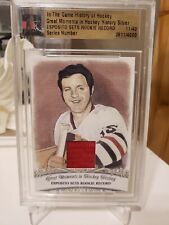 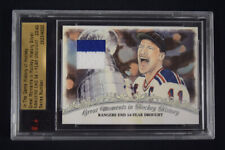 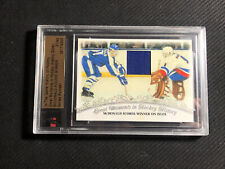 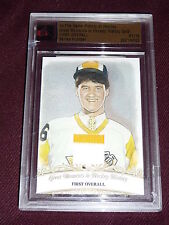 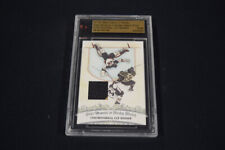