Like previous versions of Tribute, it will appeal to those with a big time collecting budget more so than the everyday collector. 2011 Tribute is nearly identical to last season's with a slightly increased emphasis on legends and improved base card design. The product as a whole is solid, delivering some legendary autographs, relics and autographed relics. The one problem with Tribute is that the box price has sky rocketed from $250-$300 into the $350-$450 range since releasing, making it a riskier rip for the everyday collector.

For old school baseball fans with enough disposable income, this product should definitely not disappoint. But for collectors on a budget or those whose prefer products featuring rookies and prospects, I would recommend passing on this high-end offering and saving up for 2011 Bowman, which releases on May 11th.

The base card design is great and an improvement over last year's, but when that same template is applied to the set's relics and autographs it comes off somewhat flat - lacking the type of flair and attention to detail one would expect from a $300+ per box product. 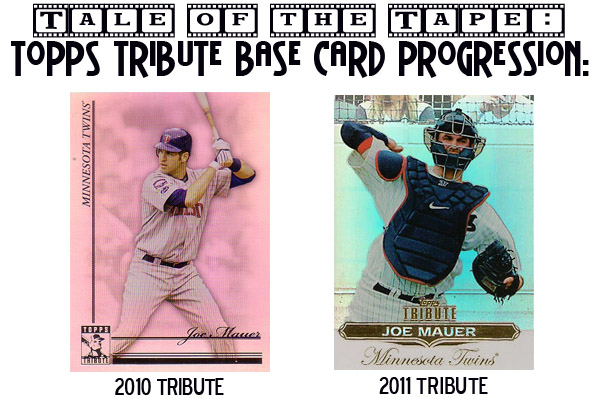 The jersey relics are fairly weak for the price paid, but this is off-set by the legendary names who once wore or used them. Pre-1990's jersey patches are much harder to come by for card companies due to the fact that the relic card didn't exist during this era.

Tribute also does a good job of blending sticker drops into each card through embedding them in the same layer as the relic, which is then topped by the card surface itself. Sticker drops are like umpires, you only notice them when they're calling a bad game. In this case, Tribute calls an excellent game.

If you consider prospects and rookies a must, this isn't the product for you. On the other hand, if you're collecting focus is legends and veterans, Tribute's checklist is absolutely stacked with them. Another thing old school baseball fans will enjoy is the inclusion of Sandy Koufax autographed cards into the product, which represent the legendary lefties first pack pulled autographs since 2007. 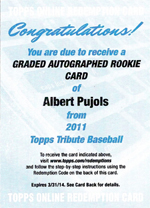 Another intriguing addition to checklist is the inclusion of 90 redemptions that entitle you to one of three 2001 Albert Pujols autographs. You won't which of the following Pujols' you will receive until you redeem the redemption. Below are the three possibilities with total quantity and book value.

Make no mistake, Tribute is an extremely risky break if you're a collector on a budget. It takes either the right combination of hits or something resembling a case hit to pay off the $300+ box price. This product is perhaps best ripped at the case level, as you will guarantee yourself a handful of big time hits. For those of us who don't have the money to play through a bad box, I would recommend grabbing singles on eBay of the players and cards you are seeking rather than opening a box with the expectation of pulling those same cards.

One thing worth noting, since it's release the supply and demand curve has sent the box price soaring. What started out as a $250-$300 box is now a $350-$450 box. This bodes well for grabbing singles versus ripping boxes. This likely has a great deal to do with the following two inclusions, one of which I mentioned above.

Anytime you open a $300+ product it should be fun and Tribute is just that, but make no mistake, that fun will take a sizable dent out of your wallet. One thing I thoroughly enjoy about Tribute versus other high-end offerings is that it delivers 6 packs per box, which lengthens both the box break experience and the margin for error. All too many high-end products present collectors with the risky single pack, one and done formula.