Bad: As with any 1 pack per box product, it is a roll of the dice whether you strike gold or come up short.

The Bottom Line: 2011 Topps Inception Football is my pick for product of the year - though there is still a months left for it to be unseated by a late season contender. It's sleek, modern, and packs a great punch without putting a whole in the wallet. Topps Inception is everything that Ultimate Collection Football used to be and more.

Two Upper Deck products came to mind while I was reviewing this product – Ultimate Collection and Upper Deck Black. The former because of its similarity to 2011 Topps Inception in terms of price point and product configuration, and the latter because of the similarities in design. My favorite set design of all time is Upper Deck Black, so suffice to say that Inception's design really jumped out at me.

The design incorporates a refined, eloquent foreground with a simplistic by modern looking background to create some truly great looking cards. The only downside of the design is that its black background means corner and edge wear sticks out. But I can personally live with that and none of the cards from my review box showed signs of chipping or corner wear.

This is definitely a rookie-focused product. It's main draw is its selection of high dollar rookie card jersey patches, autographs, letter patches, and autographed patches. Topps Inception probably has more multi-color jersey patch cards then any other Topps product that I've broken this year.

I typically consider 1 pack products in this price range to be extremely hit or miss. While there is certainly an element of that present in 2011 Topps Inception Football, there is lots of value to help minimize the risk of it being a miss. Instead of pinning the entire box's potential on the shoulders of 1 hit, it guarantees a generous 3 hits per hobby box. Inception also sports a larger-then-normal assortment of base cards – and thanks to its excellent design, the base cards are actually worth having.

This was the most fun I've had with a box break in quite a while. I honestly didn't have any strong expectations regarding Inception, so didn't know what to expect. Maybe this contributed to me giving it such a high review rating. I don't want to build it out to be some miracle product that guarantees Cam Newton 1 of 1 autographs in each box, because it isn't. But what it is – a thoroughly enjoyable football card experience – is reason enough to give this product a shot. 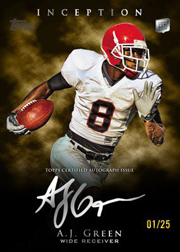 Here are the real time rankings of the 25 Most Popular 2011 Topps Inception Football card auctions: