On-card autographs, Excellent presentation, One of the best unlicensed pre-draft football card offerings of all-time, every card is an autograph (4 per box), Finite parallels, Solid bang for buck at the box level

Lacks a license from both the NCAA and NFL, Much of the product's design is borrowed from other companies (Topps' chrome stock and refractor system, Upper Deck's "Young Guns" name), no Patrick Peterson cards

With 2011 Leaf Metal Draft Football, the bar has officially been raised when it comes to unlicensed pre-draft football card offerings. From thick chrome stock to crisp on-card autographs, 2011 Leaf Metal is in a class of its own when it comes to unlicensed pre-season football card products. If football is the name of your collecting game, Leaf Metal is well worth looking into - as it's a substantially better product than both 2011 Sage Hit and 2011 Press Pass.

Another fantastic thing about Leaf Draft Metal is that each card features a crisp on-card autograph. Metal's card design is substantially better than Sage Hit and Press Pass, which are the other two currently available 2011 football card offerings. Below is a comparison I threw together featuring each set's autographs. 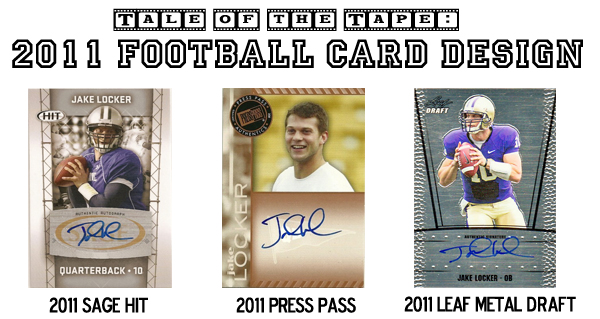 The checklist features big names like Cam Newton, Blaine Gabbert, A.J. Green, Mark Ingram and Jake Locker. Perhaps the best part is that unlike Sage and Press Pass, Leaf Metal doesn't waste time with meaningless base cards and inserts, instead cutting straight to the hits. I'm not a base card hater, it's just that pre-draft products aren't about building sets, they are about getting your hands on the first autographs from a fresh crop of rookies

The only real issues I had with the checklist was the use of the term "Young Guns" (Upper Deck Hockey!) and the absence of several notable prospects including LSU's Patrick Peterson. One thing worth noting is that the checklist features nothing but 2011 rookies, so if you consider veterans a must in a football card product, this product probably isn't for you. 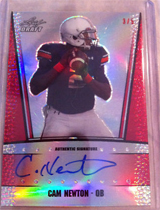 Leaf Metal is an excellent value at the box level, with each $90 hobby box delivering 4 crisp on-card autographs. Leaf Metal is the first unlicensed pre-Summer football card offering I've ever opened that didn't result in a bad case of buyer's remorse. Leaf Metal is a game changing product and this is evident when looking at the fantastic single card sales on eBay. Below is a look at the top 5 2011 Leaf Metal eBay sales at the time this review was done.

In addition to solid top-tier sales, the overall depth of card sales on eBay is extremely impressive, with a litany of cards topping the $50 threshold. The only real question I have about Leaf Metal's value cannot be answered at this time, that question - will Leaf Metal fall to wayside like every other pre-draft product once the big brands hit the market? That being said, the value should hold up much better than products like Sage and Press Pass in the long run.

I don't think I've ever enjoyed an ulicensed pre-draft NFL product as much as I enjoyed 2011 Leaf Metal Draft. If you're a hardcore football card collector who is looking for something to rip, I highly recommend giving Leaf Metal a look, as it delivers a mid-season football card experience in early April. 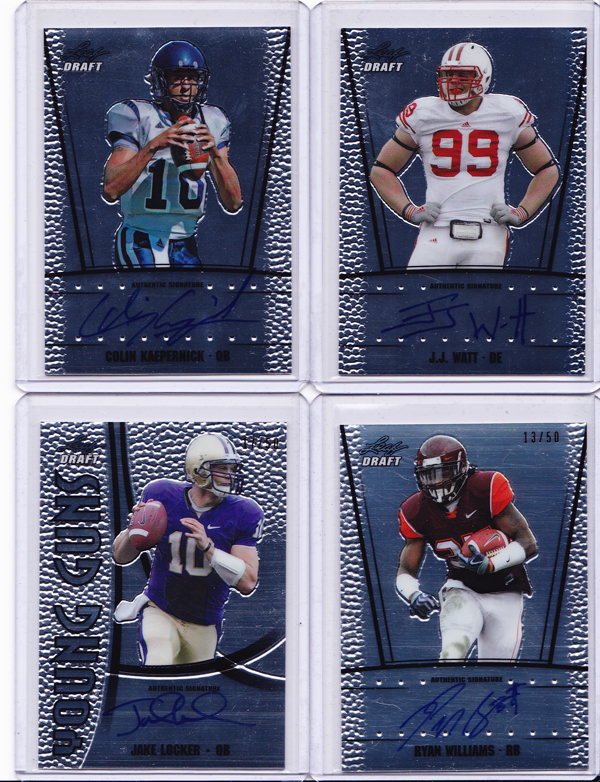