1965 Fleer Hogan's Heroes trading cards capture a lot of the wit and visual comedy of the TV classic. It also has a similar look to a set released a year earlier by another manufacturer.

Col. Hogan and the show's other allied WWII prisoners of war star in the set alongside such goofy and incompetent German officers as Col. Klink and Sgt. Schultz. Card fronts are on the basic side with a black-and-white photo from the show or an on-set promo shot. A caption is at the bottom, usually a corny one-liner. 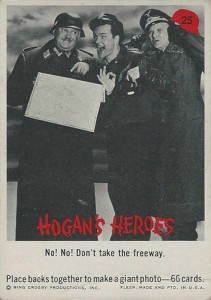 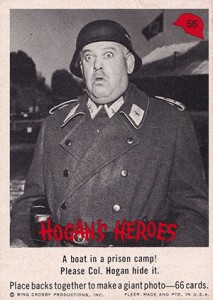 The Hogan's Heroes title is in red at the bottom of the image. A red German helmet holds the card number at the top. These are the only uses of color in the set.

1965 Fleer Hogan's Heroes cards backs are all puzzle pieces. They have no additional text or information. 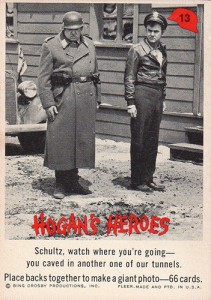 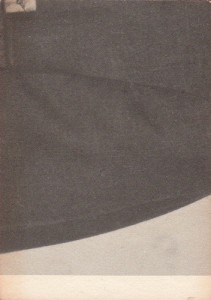 This set is strikingly like the 1964 Donruss Addams Family trading cards. Although the shows are different, the overall design is the same down to the red highlights. But that hasn't hindered the popularity of either set.

1965 Fleer Hogan's Heroes is a pricey set to put together. Even off-condition singles sell for $5 and up. Top-condition cards professionally graded by a reputable company like PSA reach into the hundreds.

This isn't the only time Hogan's Heroes appeared on trading cards. It has numerous cards in 1998 Inkworks TV's Coolest Classics. It's an anthology set of sorts covering other shows like The Brady Bunch, The Beverly Hillbillies and Get Smart. 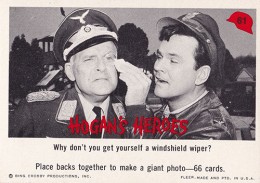 1 Lose a tank Col. Klink?
2 Sir, I regret to inform you that none of our prisoners have escaped.
3 I wish I could see if my shoes were shined!
4 What happened to the girl I was dancing with?
5 I packed your car, General! The ticking??? Pay no attention to it!
6 Anybody would think there's a war on!
7 It's not a tunnel, Klink, we're starting a victory garden.
8 Schultz, make sure the eggs are fresh this time!
9 If we escape...you want to come with us?
10 Col. Klink, in our army you'd be lucky to make Corporal!
11 Watch that first step General, it's a lulu!
12 And I say, we don't need a barbecue pit.
13 Schultz, watch where you're going—you caved in another one of our tunnels.
14 Folies Bergere? I'd like to make a reservation for Hogans Heroes.
15 Open the wine cellar— I got an order for three more cases.
16 Col. Hogan, I've got to keep these glasses on...Klink passed me in the street three times.
17 Klink, I think your sirens sound better.
18 You cook better than my wife! You're better looking too!
19 How do I know...I don't speak German.
20 Carter, how about a game of gin rummy?
21 My son, the P.O.W.!
22 Schultz, next time you need money, come to see me...Don't sell my boots!
23 Col. Hogan, you and your men have 24 hours to return my boots.
24 Col. Hogan, this was a quiet camp until you got here.
25 No! No! Don't take the freeway.
26 What do you mean you cancelled the dance?
27 Klink, you're starting the Christmas party early this year.
28 What gives you the idea that I need a furlough?
29 Put up a road block, my monocle is missing.
30 Don't worry; I'm not a spy. I'm going to a Halloween party.
31 How did I know it was a German uniform??? I got dressed in the dark!
32 Are you the U.S.O. hostess?
33 I swear, you're the first enemy I ever kissed.
34 And boy can I do bird imitations!
35 And this one is the Yellow-Bellied Sapsucker!
36 Explain to Klink...It's not a tunnel; we're digging for clams.
37 I got it as a prize in a cereal box.
38 I caught this in a door.
39 Of course it's a funny hat, but it's great for carrying Pizza.
40 Tell the truth mate, you've got a liverwurst sandwich in there.
41 If I can't have my afternoon tea, I'll shoot my way out of here.
42 I don't think Klink 'll miss either one of us at roll call.
43 Schultz, there's not a strand of barbed wire left in this camp and I'd like to know why!
44 They're not wire cutters Col. Klink. Helga was giving me a manicure.
45 I don't think the prisoners would like it if I brought you with me, Col. Klink.
46 I see nothing...nothing!
47 Drink that and you'll be a bushy haired kid again.
48 The door knob has more hair than Klink.
49 It's growing!!! I won't freeze on the Russian front with hair.
50 Definite signs of dandruff.
51 Col. Hogan, I've got the overseas operator on your call to East Peoria.
52 Duck behind Lebeau—Klink will never notice you.
53 Don't ask me, Klink. I don't know whose side Schultz is on.
54 If we get a date for you, we'll make it a double escape.
55 Don't worry—Schultz has cotton in his ears.
56 A boat in prison camp! Please Col. Hogan hide it.
57 Hail, Hail, the gang's all here! But not for long!
58 Ah, what wonderful sauerkraut juice.
59 What do you mean lilies for Col. Klink! Let's get poison ivy.
60 Temper! Temper! You'll fog up your monocle.
61 Why don't you get yourself a windshield wiper?
62 And you didn't think we could make a do-it-yourself airplane.
63 Look at it this way Klink, it beats hiking with a full field pack.
64 Get away you big clown; you're supposed to be a vicious watch dog.
65 I've gained twenty pounds since I started eating your desserts.
66 He told me he bought it with the money from his paper route.